What is the link between hydrocarbon exploitation in North Africa and a company registered in the British Virgin Islands? Ahmed Bouchamaoui. The businessman and heir to the Al Majd Holding group created a subsidiary of his oil group in this tax haven on January 17, 2000. Inkyfada investigated.
Written by
Monia Ben HamadiNissim Gasteli
| 11 January 2022 |

In the hydrocarbon sector, the exploration and exploitation of hydrocarbons constitute the first steps on the long road to producing energy. In Tunisia and North Africa, Medex Petroleum Limited is one of the major players. This company, headed by businessman Ahmed Bouchamaoui, is based in Paris, and was founded in Cyprus in 1995.

Amidst the thousands of documents leaked through the Pandora Papers, inkyfada discovered that a subsidiary of the Medex group was registered in the British Virgin Islands on January 17, 2000. The primary directors of Medex Petroleum (North Africa) Ltd are the Tunisian businessmen Ahmed and Raouf Bouchamaoui, and their associate Tarek Mekada. 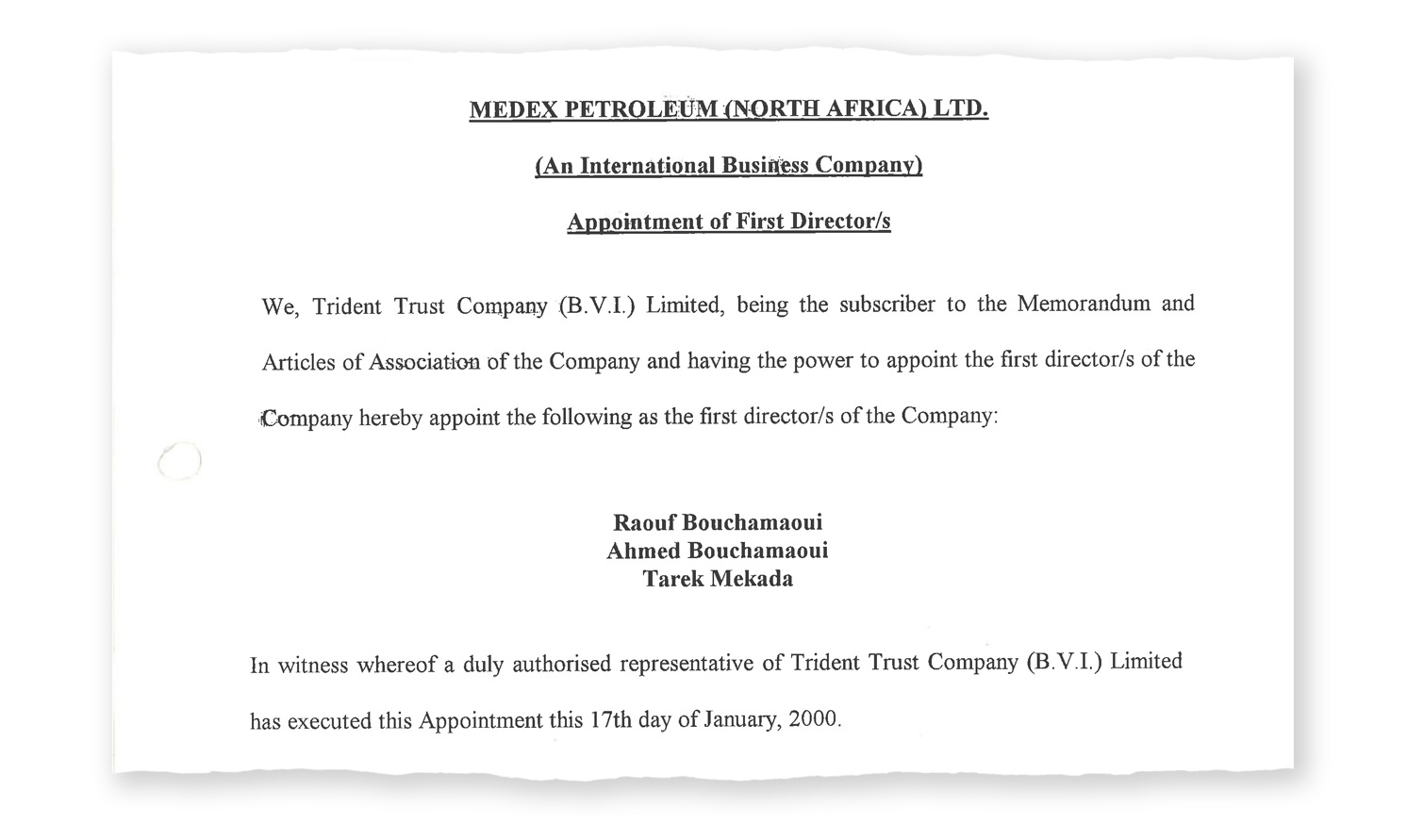 Contract for the appointment of the above directors, dated January 17, 2000. 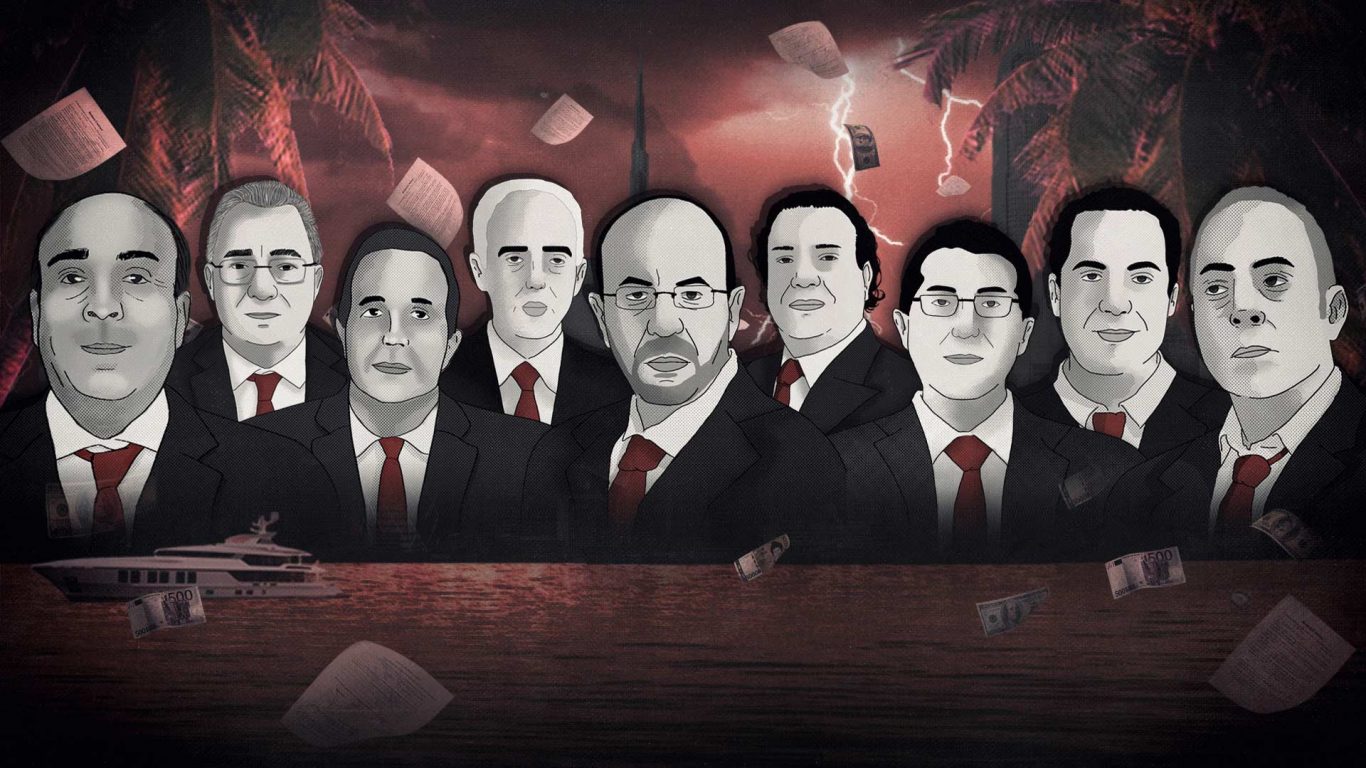 This is what enables the group to operate in North Africa. Another company of the same group, Medex Petroleum (Tunisia) Ltd (formerly M.P Zarat Limited), was registered in the Cayman Islands and based in Tunis. However, inkyfada was unable to obtain any further information on their operations.

Ahmed Bouchamaoui was not the first one in the family to invest in the oil sector. The family company Bouchamaoui Industries was founded in 1948 by Ahmed Bouchamaoui - a namesake from the same lineage, and was originally a civil engineering company based in Bouchamma (Gabes). "During the 1970s, the evolution of the company from a construction and civil engineering contractor to an industrial contractor in the energy sector was a natural development, given the increasing hydrocarbon activities in Tunisia and neighbouring countries", the company's website states.

In addition to his family' proximity to the sector, the Ahmed Bouchamaoui that is mentioned in the Pandora Papers is also the heir to the Al Majd Holding group, which was founded by his father, the late Abdelmajid Bouchamaoui. In 2007, he gave way to his two brothers Maher and Hichem Bouchamaoui in order to devote himself to the development of the family group internationally, notably through Medex Petroleum Ltd. Ahmed Bouchamaoui also heads the Al Kassm Holding group which operates in mining resources in North Africa. In 2007, he also became Vice President of the Executive Committee of Espérance Sportive de Tunis.

Trouble with the law

In 2012, the management of Medex Petroleum (North Africa), registered in the British Virgin Islands, became complicated for Ahmed Bouchamaoui and Tarek Mekada (Raouf Bouchamaoui's name does not appear in other documents). Failure to pay an invoice from Trident Trust then made it difficult to obtain a "certificate of regularity" for the Tunis office to audit the company's accounts.

After several fruitless exchanges with Medex's Tunisian subsidiary, it was finally Jean-Philippe Berthet, the company's lawyer, who promised to honour the unpaid invoice and expressly requested the certificate. "The audit of the financial statements is required in the context of an important operation that is pending", he says.

But the situation is far from settled as a pledge over the company's shares (the equivalent of a mortgage over securities) was registered in 2005 to secure a commercial transaction with a bank that never came to fruition. However, says the lawyer, "the pledge was forgotten and neither Medex Petroleum Ltd nor Medex Petroleum (North Africa) Ltd ever took the necessary steps to remove the pledge from the share register".

Trident then instructed the lawyer on what to do: "You will need a signed bank certificate stating that the obligation has been satisfied and resolutions authorising us to release the shares". In the absence of a response, the company was eventually "frozen" on November 1, 2012 for failure to pay government taxes.

Later on, between 2014 and 2017, the partners and their lawyer try to have their company reinstated. After numerous back-and-forths, a certificate of regularity was finally issued. The main people involved did not wish to respond to inkyfada's requests for clarification about these numerous setbacks.

Although the link has not been verified, the period of this 'important operation' referred to by the lawyer coincides with Medex Petroleum (North Africa) putting its interest in a hydrocarbon exploration and exploitation concession in Algeria up for sale. This concession was signed in 2002 under the production sharing regime with Sonatrach, the Algerian national oil company. At stake: assets estimated by Medex to be worth 500 million dollars.

Additionally, the company's administrative setbacks coincide with operational difficulties in Algeria. Indeed, the company has accumulated several million dollars in debts even before the first wells were put into production, and declares itself incapable of honouring its commitments. In order to get out of the predicament, Medex announced the intention to sell its assets the same year, speculating on the potential of the deposits. However, no buyer could be found as the offer was considered too steep by a number of interested oil companies.

The company's difficulties worsened as it found itself unable to pay its oil service providers, triggering legal proceedings. In an email exchange from October 2013, reference is made to an arbitration procedure initiated by Schlumberger, a French multinational oil services company, seeking to recover a debt of $3.6 million from Medex Petroleum (North Africa). In 2014, the arbitration court ruled in favour of Schlumberger, without any record of the actual settlement of this fine.

In 2015, Sonatrach also brought its case before the International Court of Arbitration demanding the outright cancellation of the contract with Medex, which retaliated by claiming compensation. On December 13, 2016, the arbitral tribunal ruled in favour of Sonatrach, thus winning the case.

Ahmed Bouchamaoui, a familiar face in the British Virgin Islands

This was not the first time Ahmed Bouchamaoui dabbled in tax havens. Within the framework of the Panama Papers in 2016, inkyfada uncovered that his name had appeared in the documents of a company called 'Inersa Investments INC', registered in the British Virgin Islands in 1995.

According to documents from Mossack Fonseca, the businessman and his father Abdelmajid (deceased) obtained a general power of attorney granting them full powers to manage the company Inersa Investments INC. This power of attorney also provided for the creation of a bank account.

His cousin and associate Raouf Bouchamaoui also appeared in the Panama Papers.

This investigation was conducted in partnership with the International Consortium of Investigative Journalists (ICIJ).
This article was written respecting gender sensitive grammar.