The Evolution of COVID-19 in Tunisia: Statistics, Predictions and Threats

Updated March 31, 2020. There are calls for a total lockdown, border closures, social distancing, and forced quarantine. With 423 cases declared by the end of March, the spread of the virus is accelerating slower than expected. But still, understanding the speed of spread is important, and the situation in April will depend on the effectiveness of the measures taken. The main challenge is the threat to the healthcare system, posed by the low rates of testing and the seeming impossibility of treating all the victims of this unprecedented pandemic.

There is, however, a widely shared consensus based on the comparative experiences of different affected countries: the real threat of the collapse of the healthcare system.

This threat is mainly due to the fact that severe cases of COVID-19 infection will require hospitalisation, often in intensive care units, and according to the latest estimates, likely for a prolonged period of time.

March 23, 2020 marked a turning point in Tunisia. Nissaf Ben Alaya, director of the National Observatory of New and Emerging Diseases, was visibly concerned. Among the recently detected cases, some could not be traced and therefore the scenario that the epidemic would become - or was already - out of control, despite the decision for general containment, seemed increasingly likely.

This threat was confirmed on Wednesday March 25 with 59 newly reported cases (diagnosed on March 24). The authorities are struggling to identify the chains of transmission and the epidemic seems to be spreading faster.

The number of people actually infected compared to the number of people diagnosed through testing is a major unknown in this story. However, the figures compiled at the global level by competent authorities such as the World Health Organization (WHO) make it possible to establish projections on the evolution of the number of people who could be contaminated based on the current trend. Changes to this trend will depend mainly on the effectiveness of political and health measures.

Overall, with the official data available, Tunisia is currently experiencing an exponential growth in the number of positive cases of COVID-19. Until March 31, on average, the number of additional cases has increased by 26.3% every day since the discovery of the first case.

This rate of daily spread has been steadily declining this past week. This curve is, for the time being, comparable to the virus’s progression in other countries affected earlier by the epidemic, such as Italy, France or South Korea.

Some countries, such as South Korea, are managing to contain the epidemic, while Spain, Italy and France are experiencing a major health crisis.

THE COLLAPSE OF THE HEALTHCARE SYSTEM: A REAL THREAT

By March 31, 2020, there were 423 confirmed cases of COVID-19 in Tunisia. At the current daily rate of spread (26.3%), the country could have thousands of additional cases by the end of April. But with the steady decline in the rate of spread, it may be possible to make more optimistic short-term projections.

The WHO estimated a 20% rate of hospitalization due to COVID-19 infections; this figure (which according to the Tunisian authorities stands at 5%) is subject to change as the data is refined at a global level, mostly through increased testing.

The key issue of this pandemic is the capacity of health systems to maintain themselves and to deal with a large inflow of patients at the same time. Generally, patients hospitalized due to COVID-19 tend to require respiratory assistance in intensive care. Therefore, the availability of medical equipment such as respirators and ventilators is also a concern, as intensive care units are likely to be rapidly overwhelmed.

The Ministry of Health has not provided exact figures on the capacity of facilities in Tunisia. Various statements by officials - notably the Minister of Health, Abdellatif Mekki - to the media refer to one thousand equipped intensive care beds between the public and private sectors. It should be noted that not all these beds are reserved for COVID-19 patients.

This estimated figure may also be subject to change, as the authorities have stated that the capacity of hospitals and other centres dedicated to treating cases may be increased. The available data also shows notable disparities within the country’s public services, especially in terms of the regional distribution of equipment and of intensive care beds.

Recent study on intensive care services in Tunisia: is the public sector ready for COVID-19?

Much of the data currently available on the state of intensive care facilities in Tunisia are taken from a doctoral thesis defended by Amin Hammas at the Faculty of Medicine in Tunis in January 2020. According to other available data, the number of “active” beds varies between 200 and 300. More beds are budgeted for but not currently available for use. Of the 331 beds included in Hammas’ January study, 49 were reported to be non-functional.

NUMBER OF INTENSIVE CARE BEDS IN PUBLIC HOSPITALS PER 100,000 INHABITANTS

According to the statements made by Ministry of Health officials, in addition to the (200-300) beds installed in public health establishments, there are around 800 existing beds in the private sector. However, amongst these private beds, only an estimated few dozen would be dedicated to the current epidemic.

With the current rate of spread, the number of people who may require hospitalization will exceed 1,000 by April 17, 2020. If the epidemic is not curbed, and assuming that all these beds are available for COVID-19 victims, the health care system would reach saturation by this date.

In addition to the lack of beds and medical equipment, Tunisia faces a shortage of masks and protective equipment for health-care workers. This is a real threat in several European countries, including Italy, France and Spain. The lack of equipment has in particular forced Italian doctors to sort patients to be treated according to their life expectancy.

The rate of contamination of healthcare personnel due to lack of protection, not only endangers them, but also reduces the ability of health services to treat a large number of people carrying the virus, as well as patients suffering from other illnesses.

LACK OF TESTING: THE RISK OF UNCONTROLLED SPREAD

Official statistics on COVID-19 in Tunisia

Between March 2 (the discovery of the first case of COVID-19 in Tunisia) and March 31, 2020, less than 5,000 people have been tested. Tunisia, like other countries, initially adopted a policy of targeted testing of people who had been abroad and were showing symptoms. If a person tested positive, the authorities tried to trace all the people with whom they had been in contact. These people were then asked to place themselves in self-isolation, without necessarily being tested. They were only tested if they showed symptoms.

To date, more than 11% of the targeted tests have been positive. The number of tests have increased significantly since March 10. For the first time, on March 25, more than 300 tests were carried out in a single day.

The authorities then decided to grant other laboratories (mainly the Institute Pasteur of Tunis) the capacity to carry out these tests, which were all previously conducted by the reference laboratory of the Charles Nicolle hospital. As a result, on March 27, a record of 724 screenings were able to be conducted in one day. But compared to other countries, this number remains insufficient. 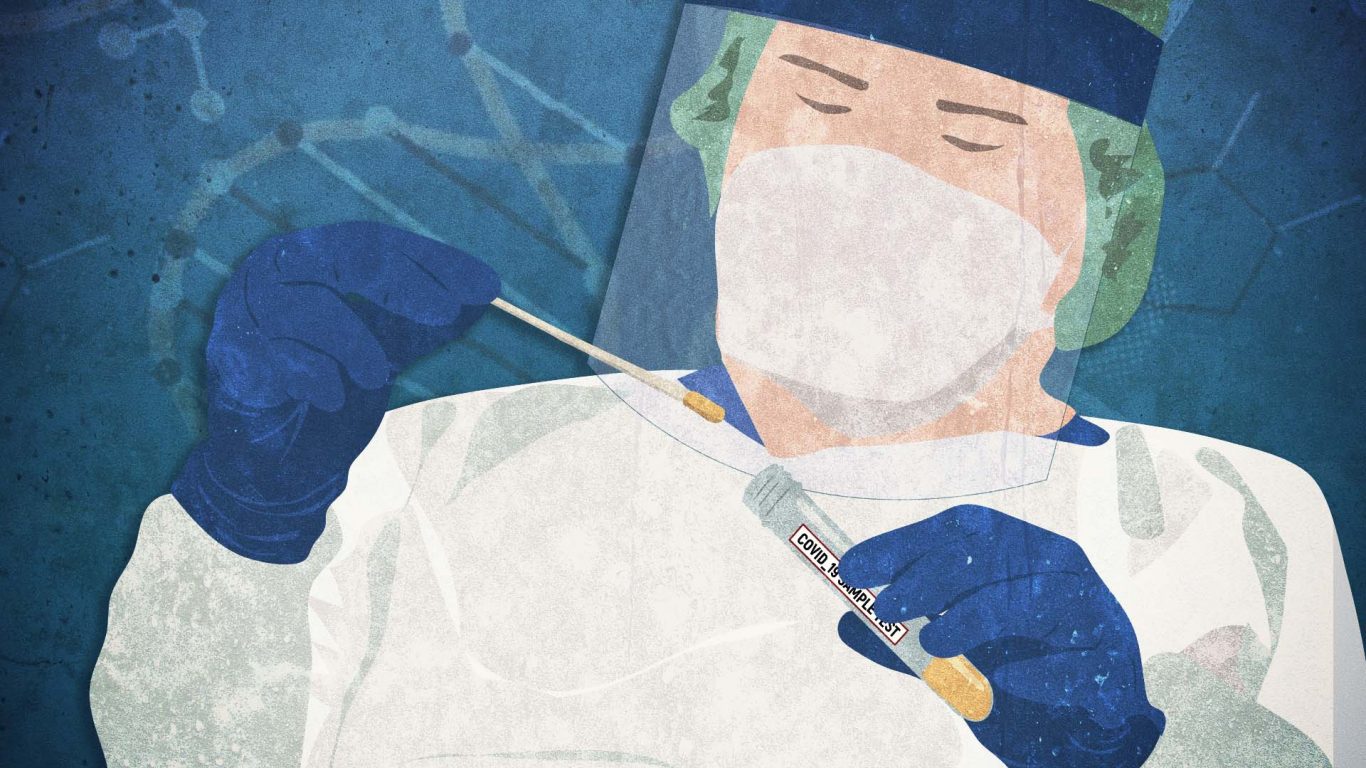 COVID-19: All you Need to Know about Tunisia's Testing Policy

On March 22, the authorities announced that they had not been successful in tracing the source of some positive cases of COVID-19 in Tunisia. This confirms that the epidemic is spreading beyond the so-called “high-risk” cases and that the number of infected persons is most likely higher than the reported numbers.

The week before, the Minister of Health, Abdellatif Mekki, announced a plan for a significant increase in the number of tests available. The minister also assured that around 500,000 so-called "rapid" tests (serological and not the classic "PCR" tests which require more time and resources) would be imported. The Tunisian Central Pharmacy launched a call for bids for the purchase of 400,000 of these latter tests, but they have yet to be delivered.

Despite the recent announcements about a planned increase in testing in the very near future, the untraceability of cases could still have serious consequences.

For example, for case number 79, a 28-year-old man who had returned from France, six days elapsed between the date of the first symptoms and the date of diagnosis. These are days when the rate of contagion is very high.

Each time someone tests positive for COVID-19, authorities conduct a field investigation to find out with whom the patient has been in contact. Many cases have been detected this way, and this time interval before diagnosis can be critical. However, given the long incubation period - the period between infection and showing symptoms (on average 5 days according to the Pasteur Institute in France) - there may also be a significant discrepancy between the number of people potentially infected on a given date and the number of cases diagnosed.

This hypothesis is based on an average established by the Pasteur Institute in France.

The above infographics make it possible to project the number of potentially contaminated cases, based on the diagnosed cases; the average spread coefficient since the first reported case; and the average incubation period.

"We have a simple message to all countries: test, test, test people! You can't fight a fire blindfolded," insisted Adhanom Ghebreyesus, the Director-General of the WHO, on March 16.

In the first 29 days following the confirmation of their first infected cases, affected countries, whether in Europe, Asia or North America, saw an exponential spread curve. With far fewer reported cases and a later contamination than the countries listed in the graph below, Tunisia is no exception.

On a different scale, the daily rate of spread in Tunisia is in fact similar to, if not higher than, that of countries now hard hit by the epidemic.

Compared to countries facing similar circumstances, Spain and Italy experienced the most rapid increase in the rate of the virus’ spread. In the weeks that followed, these two countries began to see several hundred deaths per day.

Based on a WHO case-fatality rate estimation for the disease (3.4%) and considering the reported rate of spread of the epidemic in Tunisia, 38 deaths could be recorded at the end of March and nearly 2,000 by mid-April.

This trend depends mainly on the speed of detection, the capacity of the health system to treat serious cases, and the measures taken to limit the speed of spread.

There are great disparities between countries’ death rates due to COVID-19. Germany and South Korea, among other countries opting for a massive and early testing strategy, have much lower case-fatality rates than Italy, Spain or France. As of March 24, 2020, only 149 deaths were recorded out of nearly 31,000 confirmed cases in Germany, whereas on the same date, Spain had recorded more than 2,800 deaths out of approximately 39,000 confirmed cases.

The epidemic in South Korea appears to be more controlled than in many European countries, as mass screening and limitations on movement have been part of the country's strategy from the first recorded cases.

Similar to France, Italy and Spain, following early WHO recommendations, Tunisia initially opted  for targeted testing of suspected persons, their contacts, and certain spaces of contamination. Yet, in the event that the decision of total lockdown does not lead to the flattening of the curve, this strategy could prove risky and the epidemic could get out of control. Since then, the WHO has changed its advice and has called on all countries to adopt a policy of mass testing.

Many countries are now trying to develop tests that are cheaper and faster than the conventional one. However, a month after the confirmation of Tunisia’s first case, and despite the intention of the authorities to enter this phase, it is still unclear whether there is enough capacity to follow suit in time.