How could the young businessman Mohamed Amine Miled enjoy his small recreational boat without paying taxes in Tunisia? Yet another use for tax havens.
Written by
Monia Ben HamadiMalek Khadhraoui
| 05 November 2021 | 7 minutes | Available in ArabicFrench

In 2017, the young man who was active in this family business bought a small recreational boat, named the Tinit. But while Mr Miled is registered in Tunisia, his boat is not. The Tinit flies the Manx flag (Isle of Man) and belongs to a company registered in the British Virgin Islands called Ableside Limited. Although Mohamed Amine Miled defends himself and asserts that the boat belongs to his cousin, who resides in Congo, documents from the Trident Trust (one of the 14 offshore service providers identified by the Pandora Papers) confirm that he is the sole owner. 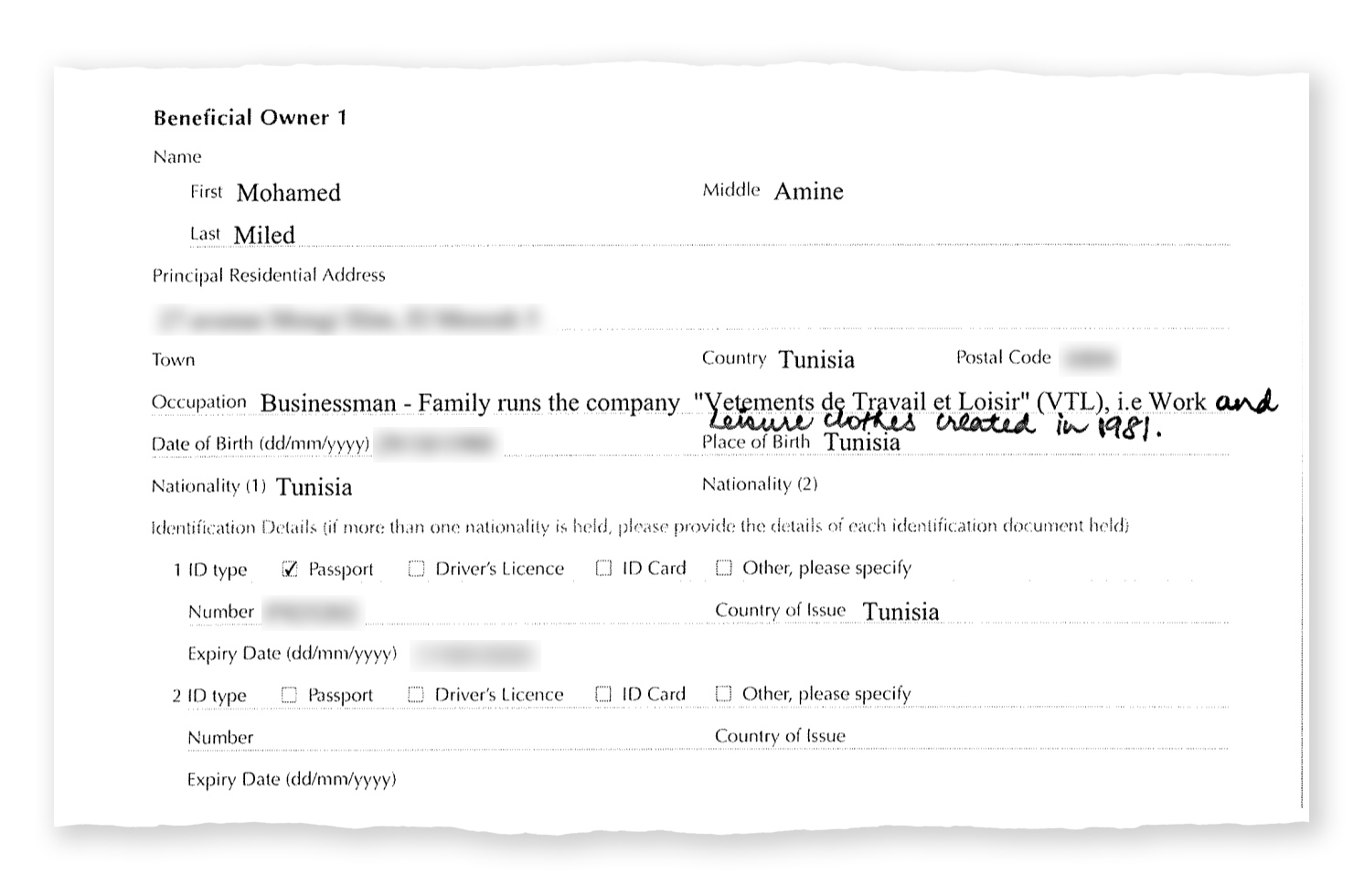 TWO ISLANDS TO HIDE A BOAT

The Tinit was registered in the early 2000s in the Isle of Man, a small autonomous territory attached to the British crown. The Isle of Man, like other territories considered as tax havens, offers something called "flags of convenience" (the maritime equivalent of tax havens), to those who wish to register their boats and avoid taxation in the country in which they reside.

However, according to the documents included in the Pandora Papers, this boat is owned by another company, Ableside Limited, which is registered in the British Virgin Islands.  At the very end of this arrangement, we find the first real owner: a Saudi national living in Tunisia. At the time, the value of the company's assets was estimated at €300,000.

However, the ownership of the company was transferred to a young Tunisian resident, Mohamed Amine Miled, in 2017. In the documents originating from Trident Trust, the latter then appears as the sole beneficiary of Ableside Limited, a company whose sole purpose is to enable "owning a boat", which in this case refers to the Tinit, whose value is currently declared at €94,000.

When contacted by inkyfada, Mohamed Amine Miled was vague. He initially asserted that his company VTL is purely an exporter. However, neither the boat nor the company that owns it are registered in the name of this Tunisian company. Mr Miled then further denied being the owner of Ableside Limited through questioning the Trident Trust documents and claiming to have a shareholder certificate in which his cousin Yosri Miled (a resident of Congo), is the real owner. Yet the shareholder certificate found in the Pandora Papers following the transfer of ownership in 2017 only mentions Mohamed Amine Miled's name.

Neither the latter, nor his cousin (who was also contacted by inkyfada), provided any evidence to prove the existence of another certificate. Yosri Miled insists that Mohamed Amine is only registered on this boat as a "skipper on board" and that as such, he would have the right to use the boat in Tunisia. However, the applicable regulations still contradict him.

Does Mohamed Amine Miled have the right to enjoy his boat in Tunisia without paying taxes that apply to residents? Behind his desk at the port of La Goulette, Mourad Bousselmi, a customs official, is categorical: "He can't". "You think I could go and take a power of attorney from a relative who lives abroad and enjoy his boat here? I couldn't", he says.

The official went on to specify that whether it is the owner of a recreational boat for private use, or the actual "user" of it, the privilege of temporary admission given to non-residents applies to individuals and not to companies. This privilege in question allows for the suspension of duties and taxes on the import of foreign-flagged vessels.

Among the files accumulated on his desk, Mr. Bousselmi found a decree on customs control of recreational boating, and particularly on entry formalities.

"The importer of the boat fulfils the regulatory conditions to benefit from the temporary import regime, namely that he resides more than six months a year abroad, and that he has no paid lucrative activities in Tunisia", he reports. Thus, "the operation always goes back to the conditions that the user must fulfil".

Therefore, whether he is the owner or "skipper on board" (member of the crew), Mohamed Amine Miled cannot take advantage of the benefits offered by temporary admission and should, according to the regulations, have paid the applicable taxes. He must also declare his assets abroad in order to comply with the Tunisian Foreign Exchange Code on sanction penalties.

TAXES, A PRETEXT FOR FLYING A FOREIGN FLAG

According to Yosri Miled's statements, the Tinit (or the "Seawaver", as it is called by a cousin) is not docked, but can be found in the port of Gammarth.

In this empty place, visitors are not welcome, and if they appear they are surveilled and questioned by the guards. The boats docked or put on hold, blend in with the autumnal greyness. The people interviewed on site were unaware of the existence of this boat, but when it came to mentioning customs duties and taxes, Anis Zarrouk, the port director, did not conceal his anger.

For him, the amounts that recreational boaters residing in Tunisia must pay to register and enjoy their boat are exorbitant, as these taxes can reach up to 50% of consumption rights, without counting customs duties, etc. Mr. Zarrouk assures that by lowering the taxes, the authorities could encourage the owners of recreational boats to register them in Tunisia, and contribute to the economy of the sector, especially in favour of the marinas. In the meantime, plenty of boats flying foreign flags van be found in the ports of the northern suburbs of Tunis.

This investigation was conducted in partnership with the International Consortium of Investigative Journalists (ICIJ).
This article was written respecting gender sensitive grammar.