Sewage Dumping in the Southern Suburbs of Tunis: A Sea of Excrement

For more than two decades, the beaches in the southern suburbs of Tunis have seen regular swimming bans due to high levels of pollution. What exactly do these waters contain? Inkyfada has had access to water analyses that detail the nature of this marine pollution, and the associated risks it poses to humans and biodiversity.
Written by
Aida Delpuech
| 08 October 2021 |

"I used to swim in this water as a child. Thirty years ago, everything changed. We saw the sea change colour and smell. Today, the situation has become unbearable", she says. Once prized by the Ottoman Beys for its natural springs, the southern side of the Bay of Tunis has gradually become the daily dumping ground for wastewater from the Ben Arous governorate, the country's leading industrial zone. The activists unanimously point their fingers in one direction: the National Sanitation Office (ONAS).

Exasperated by the inaction of the authorities and the timidity of the reactions, the association "Action citoyenne" decided to conduct, on its own, some bacteriological analyses in July 2020 on the quality of the sea water in Ezzahra. Inkyfada had access to the results of these analyses. 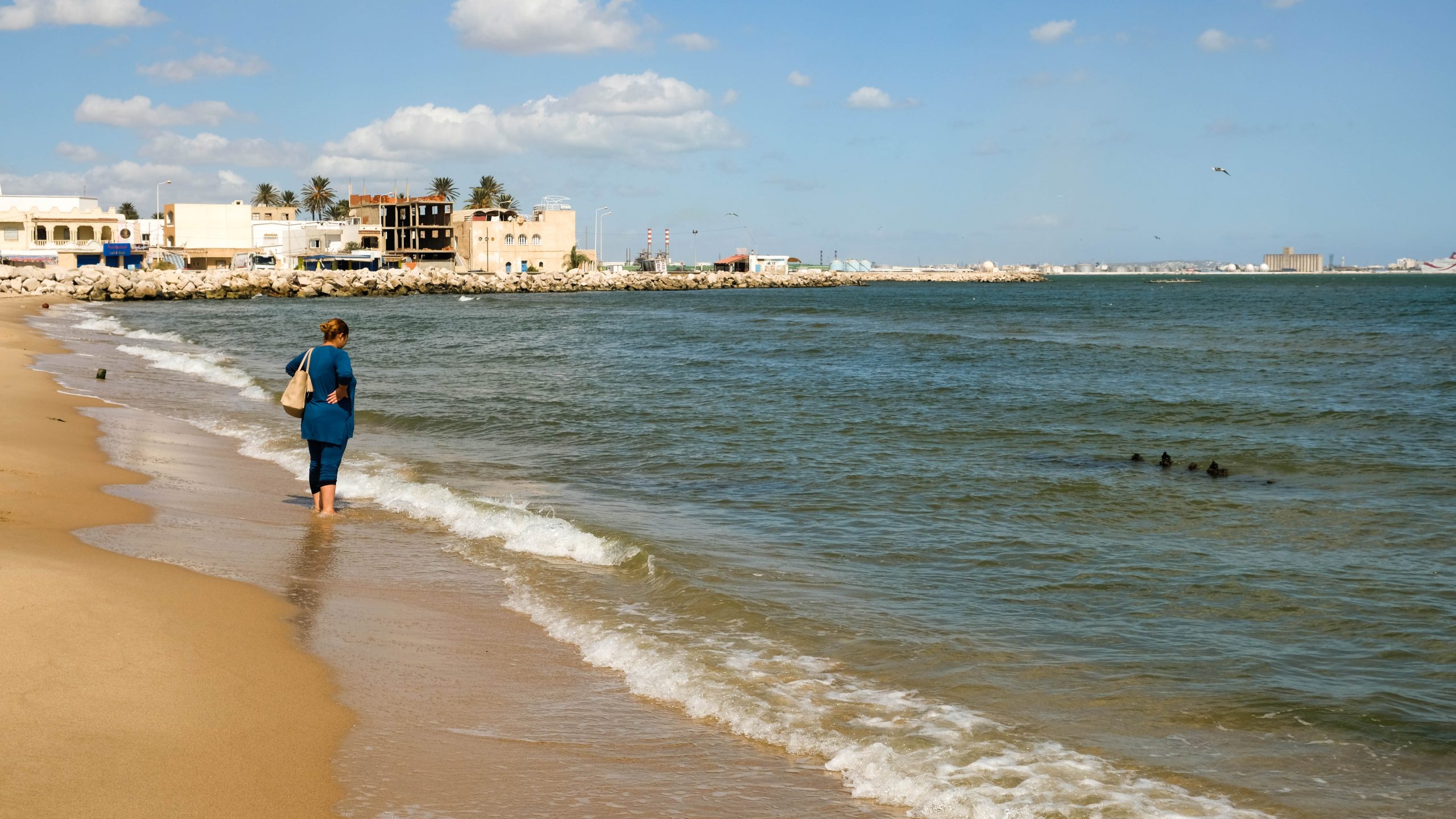 A woman observes the sea on the Rades beach. Two kilometres away, the polluted waters from the Meliane river are released into the sea.

THE SOUTHERN SUBURBAN SEA -  AN EXTENSION OF THE SEWAGE SYSTEM

"Look, it's not a river anymore, it's an open sewer", exclaims Heykel Khomsi, an active member of the Mégrine Association for Innovation and Safeguarding, and a native of the southern suburbs of Tunis. The waters from the Meliane river (wadi) flow into the Gulf of Tunis between the towns of Radès and Ezzahra. "For more than twenty years, ONAS has been discharging the wastewater from some of the homes [...] in the governorate of Ben Arous into the river, without passing through the treatment plant", he explains.

"Before, all the houses were equipped with individual septic tanks. There was no problem of wastewater being discharged into the sea", Doniazed Tounsi continues. With the creation of ONAS in the mid-1970s, houses had to be progressively connected to the sanitation office's networks, which is "when things started to deteriorate”. 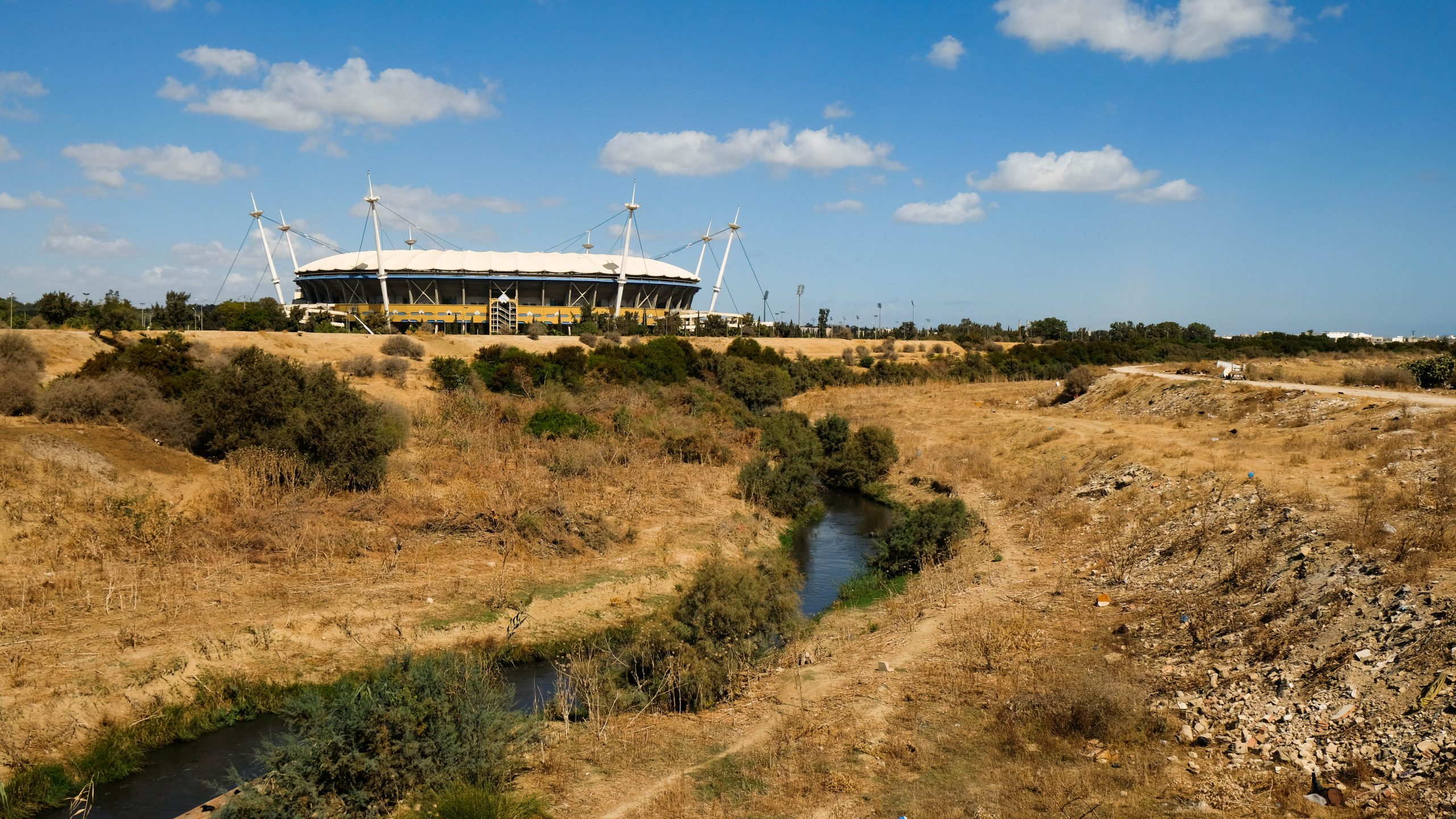 The Meliane river passes the city of Rades before discharging into the sea.

In the Ben Arous governorate, only the southern Meliane wastewater treatment plant in Rades works with treating the wastewater of a population of over 700,000. "This is clearly insufficient. Moreover, the plant does not comply with the standards: it is outdated and the water is not fully treated", Heykel Khomsi deplores.

On top of this, there is also the polluted waters from the surrounding factories that do not have their own treatment plants. This is for example the case for the Majoul preserved food factory, which is located less than 100m from the Rades wastewater treatment plant, but whose water is discharged directly into the Meliane river, according to Heykel.

Another problem is that the wastewater flows through the same pipes as the rainwater. "It's double the work for the treatment plant, which can't treat this huge quantity of undifferentiated water. In the end, it all ends up in the sea.”

FAECAL BACTERIA ON THE BEACHES

Every year before the summer season begins, the Ministry of Health communicates which places are banned for swimming, based on regular analyses carried out by the Pasteur Institute in Tunis. "I still see people swimming with their children a few meters from the estuary of the Meliane river", Doniazed Tounsi worries. This is due to the fact that these are simply places to swim, not actual beaches, which are off-limits.

"It is extremely dangerous, and the authorities continue to allow access to these areas. It's as if there's an agreement between the Ministry of Health and the Ministry of the Environment to make us believe that these beaches are still safe in some places.” 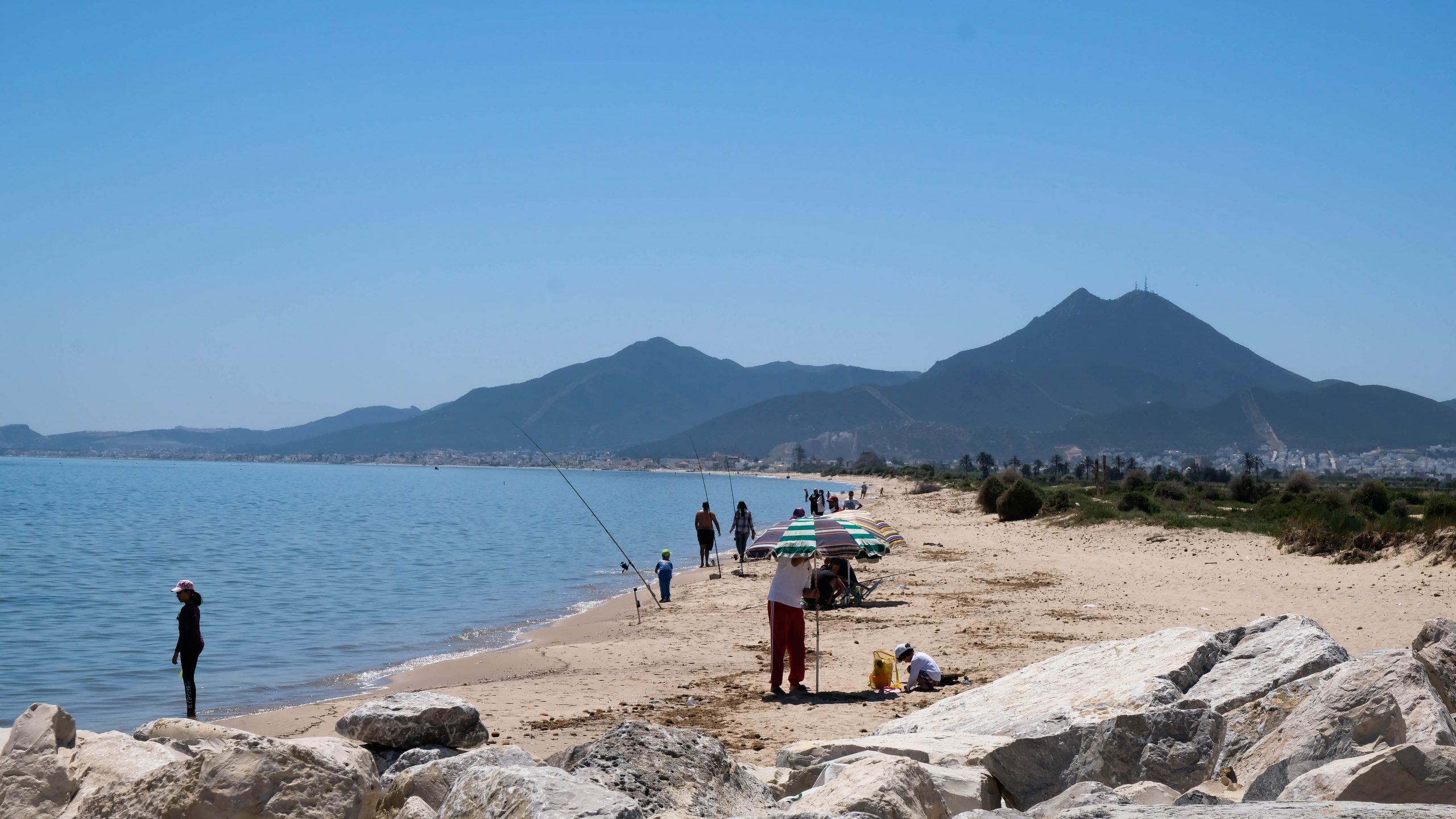 The inhabitants continue to both swim and fish on the Rades beach, despite the pollution.

Together with members from her association, Doniazed decided to carry out bacteriological analyses herself, taking samples of sea water at five different levels of the Ezzahra beach. The first time in 2019, the samples were sent to the Pasteur Institute, where the Ministry of Health also conducts their analyses. This time, the results read "uncountable", in other words, "the bacteria were too abundant for the biologists to count".

"We absolutely needed figures concerning this pollution, so in July 2020, we decided to call on the laboratory of the International Centre for Environmental Technologies in Tunis (CITET)". The results were very enlightening: a concentration of 350 faecal coliform germs (bacteria of faecal origin) per 100 ml of water was detected on the beach located 150m from the Meliane river (on the Ezzahra side), i.e. 3.5 times more than the maximum threshold stipulated by the Tunisian standard. 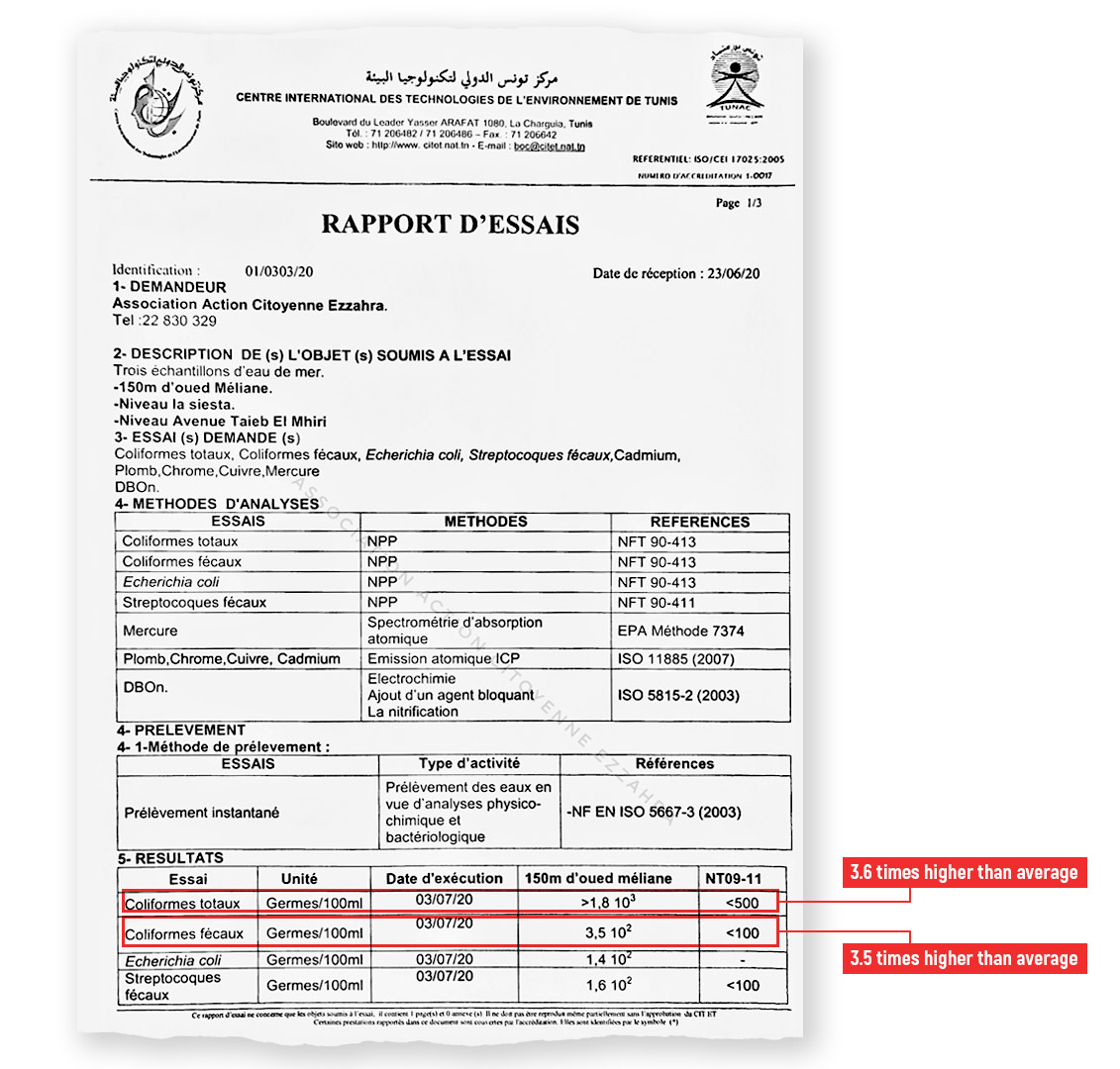 Microbiological analyses of the Ezzahra Sea carried out by the association "Action citoyenne" in July 2020. These analyses do not include other potential sources of pollution linked to industrial activities in the southern suburbs of Tunis.

"The values recorded do not comply with the standard in effect and greatly exceed the maximum admissible concentrations", warns Dr. Layla Ben Ayed, teacher at INAT and co-author of the interpretation report of these microbiological analyses.

The detection of these germs also indicates the presence of pathogenic elements such as salmonella or the Vibrio cholerae bacterium, which causes cholera and has already been detected in the Meliane river. "The presence of these germs becomes very dangerous beyond the recommended concentrations", explains Layla Ben Ayed.

For humans, the presence of such bacteria can cause diarrhea, gastroenteritis, skin problems, eye problems, etc. "It's very concerning", says Doniazed Tounsi. "It also impacts ecosystems and can disturb the balance between the  water and the marine system."

"THE MAIN RESPONSIBILITY LIES WITH ONAS"

The two activists from Rades and Ezzahra are categorical: ONAS are the ones primarily responsible. "It is up to them to collect our wastewater and treat it. This process does not exist", Doniazed Tounsi denounces.

"When we pay our water bills, there is always a portion for sanitation, which goes into ONAS' treasury. We are paying for a non-existing service."

Ali Jemail, head of department at ONAS for Greater Tunis, claims that "all the water from the southern suburbs of Tunis goes through the treatment plant. It is true that it is old, but it has not yet reached its maximum capacity". As for the wastewater found in the river, he defends himself saying that "sometimes there are illicit diversions that flow into the Meliane river. But this is accidental. There are also towns that are not connected to our network, such as Jbel Oust, but this will change." 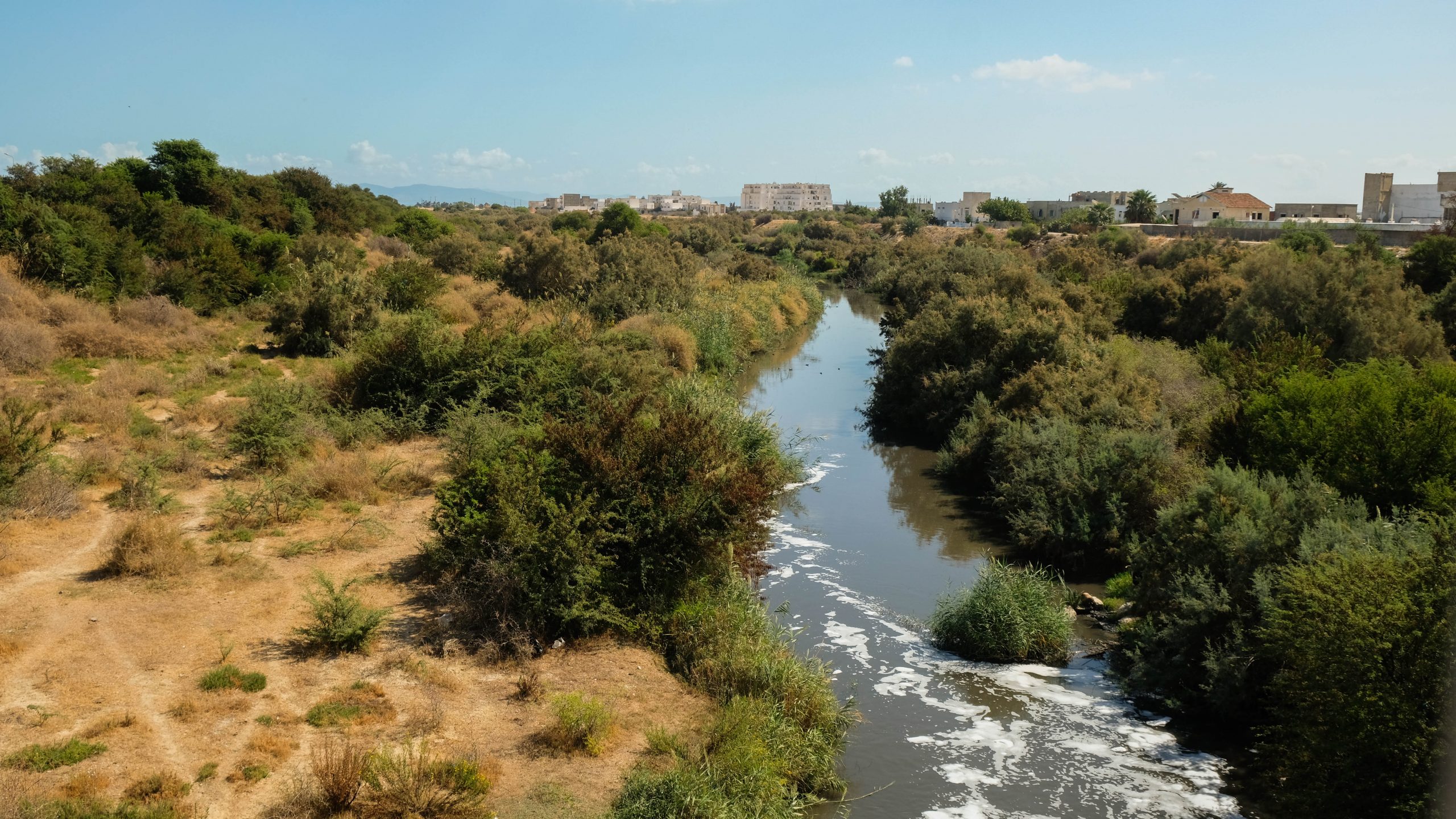 The Meliane river carries wastewater from the governorate of Ben Arous with it.

"In 2016, ONAS told us that the Meliane river would be clean by 2020. We are in 2021 and no progress is on the horizon", Doniazed Tounsi laments. Although many media outlets have announced the start of the extension and renovation of the Rades wastewater treatment plant, there is no trace of this starting. "We are in the phase of approving the file", Ali Jemail justifies. "We have collected all the necessary funds [134 million dollars], and the work will be carried out by a German company. The rehabilitation will be completed by 2023", he says.

"We know this is not true. The ONAS representatives are contradicting themselves. We met them last August. They admitted to us that they did not have the necessary funds, even though the CEO of ONAS claimed the opposite. They even asked us to approach donors to obtain funding. We have gotten so many promises that we no longer believe in them", says Doniazed Tounsi.