"We Have Lived Here for Over 60 Years": In Ariana, a Family Battling for their Housing Rights

On May 27, around 5:30 am, a family in Ariana was violently evicted from their home by the police. Now homeless, they are fighting together with an activist group for their right to adequate housing, and against land speculators who take advantage of the loopholes in the legal system, to the detriment of the local residents.
Written by
Aida Delpuech
| 18 June 2021 | 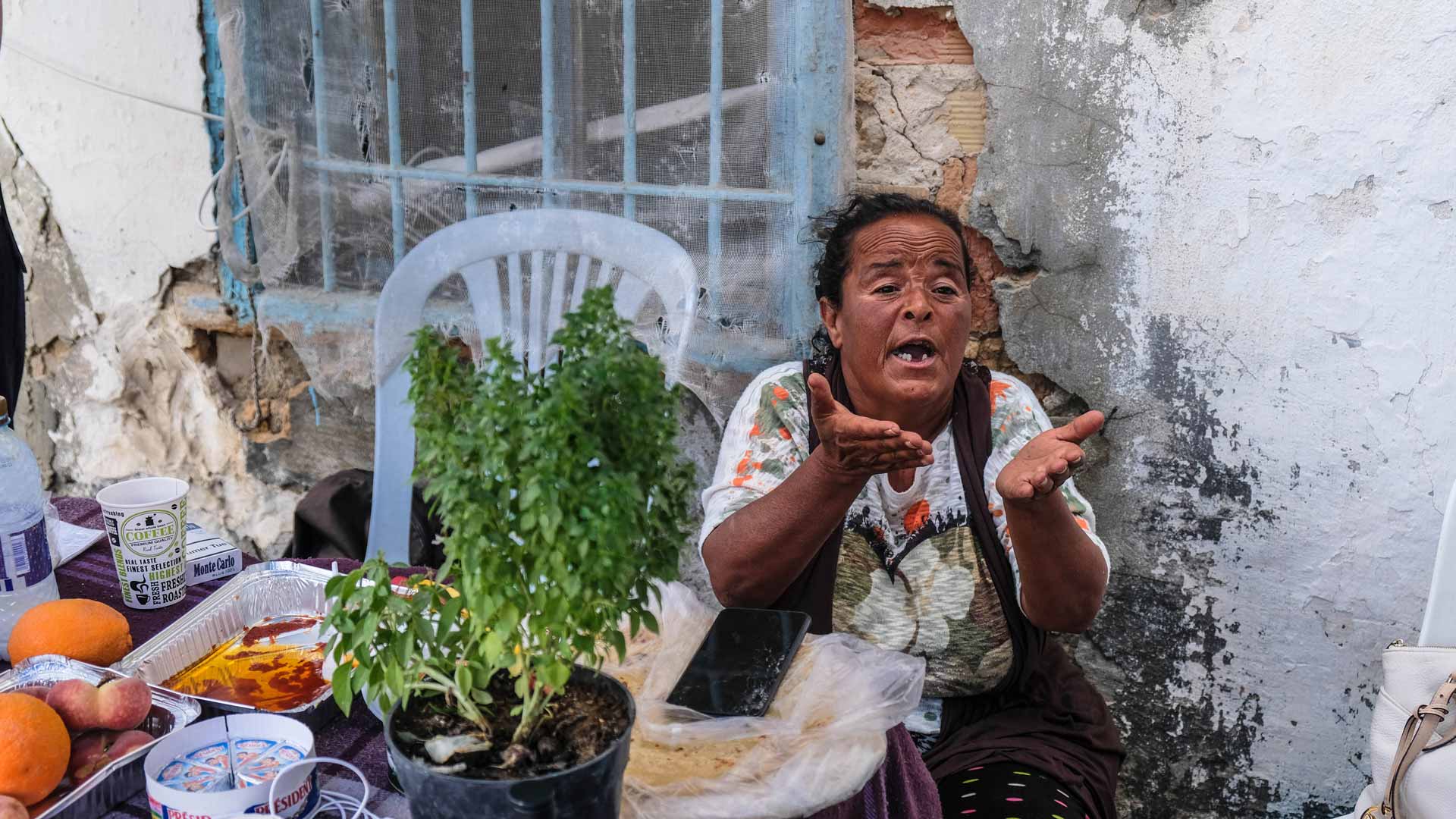 Mehrezia's daughter Sarra has hardly left the doorstep of her home since she was evicted.

"THEY ENTERED AS THE POLICE DO IN TUNISIA"

"We were sleeping. My sister got up at dawn to open the door of the house, in case my brother would come. He used to come for coffee with my mother very early in the morning before going to work. That day, there were more than 70 police officers in front of our door", says Sarra. Inside the house, the three women and the young man were still half sleep.

"They entered as the police do in Tunisia: that is, violently", says Rania Majdoub, Mehrezia's granddaughter. "My grandmother was behind her bedroom door. A policeman violently opened it and she fell. Her arm still hurts today."

On May 27, at 6am, the house was emptied of its four inhabitants who were handcuffed and insulted. "My sister and mother are very ill, they suffer from diabetes and high blood pressure. We were not even allowed to collect their medication, it was left inside."

It was a long day: "They transferred us to two different police stations, then separated us. I stayed with my mother and we were released after eight hours", Sarra recounts. A few days later, her son was detained for 48 hours on charges of intoxication, disturbing the peace, and obstructing the authorities. He was blamed for being on the street, even though he had just been evicted from his home. "It's harassment, we live through it every day", she says.

On the day before, "the police went to the local locksmith to ask him to change the lock on our door. He refused to help them and came to warn us", Rania adds.

Mehrezia and her children are now on the street, relying on family support and neighbourhood solidarity. Both a sit-in and a support committee for Mehrezia and the right to housing were established in the hours following the eviction. The family is supposed to have a week to recover their belongings, but the sealed door is impenetrable. Volunteers take turns to ensure continuous presence on the spot, "the police can come back at any time to finish emptying the house", Rania worries.

The initiatives and actions succeed one another: wooden bleachers, lent by the artistic collective "Bila 3onwan" (Without address), have been installed by the doorstep of the house in order to initiate public debates with passers-by. The structure was brutally destroyed the following night: "The police turned up with a bulldozer. Moreover, when they come, it's always at night", comments Layla Riahi, architect and member of the support committee for Mehrezia. 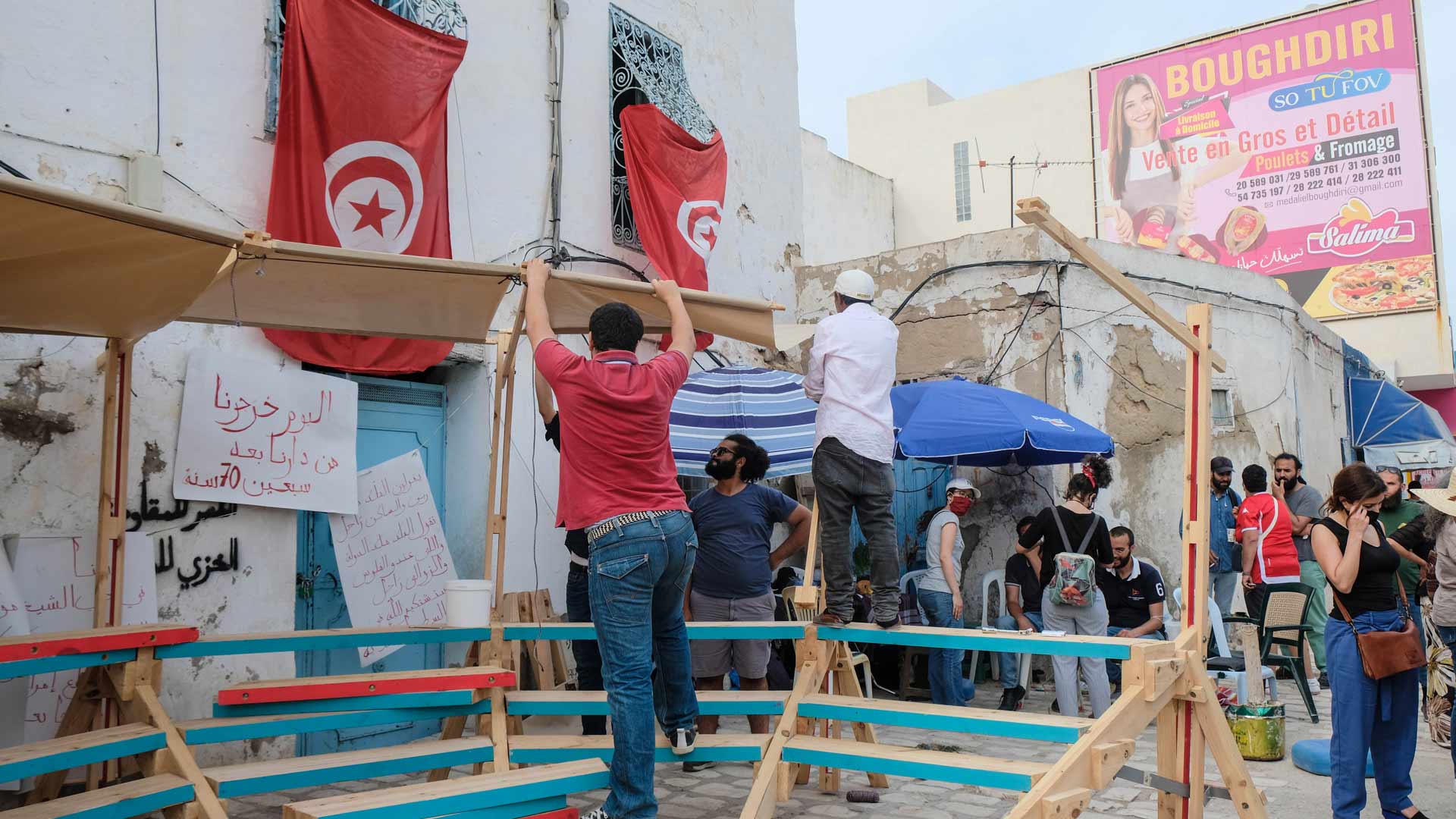 Volunteers from the support committee for Mehrezia and the right to housing install wooden bleachers, only to be demolished the following night.

A THREAT THAT HAS BEEN LOOMING FOR OVER 20 YEARS

The first purchase agreement for the house was signed in the early 1990s, more than forty years after the tenants had moved in. Five years after the sale, "the new owner accused us of illegally occupying the property, even though we were still paying rent. What's more, we are supposed to be given priority in the event of a sale", says Rania, Mehrezia's granddaughter. The landlord took legal action against the family, but for procedural reasons, the lawsuit was dropped.

A second lawsuit was then filed against the Idrissi family in 2009. This time, the owner won the case and a final verdict was handed down by the Court of Cassation. The Idrissis were no longer legally considered as tenants, but nevertheless decided to stay. "The judge systematically questioned the authenticity of our documents and testimony. There are rumours that the trial was corrupt, but it is very difficult to prove", says Rania.

The house was subsequently resold, once again without informing the tenants. According to several sources, the current owner is none other than Mr Ben Miled, a former RCD (Democratic Constitutional Rally) executive. "He is a thug with a lot of money", Rania says indignantly. "He first wanted to intimidate us. He came to see my uncles to tell them that there were going to be lawsuits, [and] that it would be best to leave. There was daily harassment, the cops conducted several raids, and this winter we filed a complaint."

Now the owner is taking a more aggressive approach. According to the testimonies of some activists, he went to the public prosecutor, who subsequently demanded enforcement of the 2009 verdict, something that the Ariana town hall had refused to do. "Some people spotted Mr Ben Miled at the police station the day before, the day of and the day after the evacuation", Rania said. 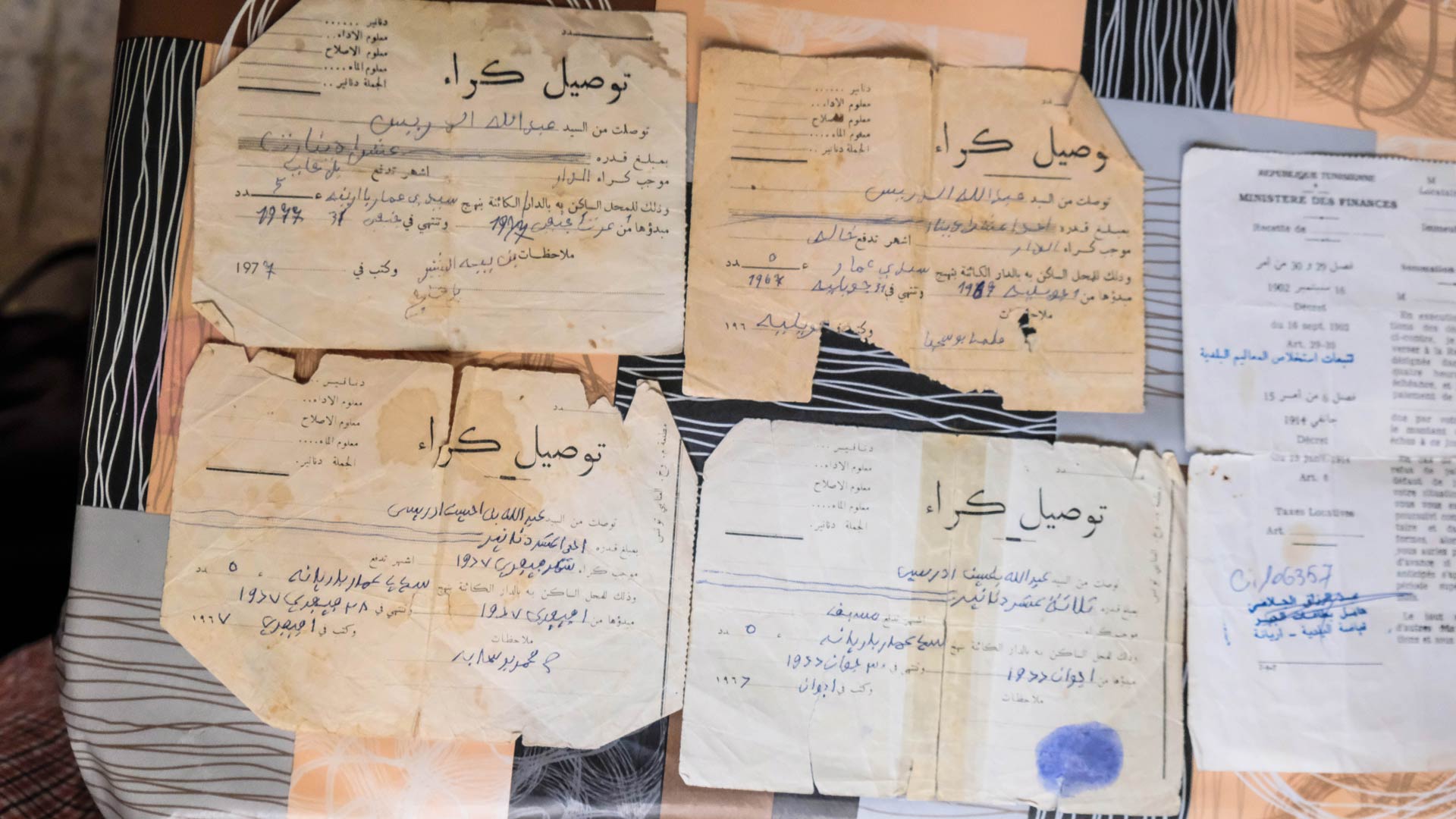 Receipts for rent payments made by the Idrissi family.

"Most of the time, it is private individuals who sneak in to search for these old houses", explains Layla Riahi. The day before the family was evicted, shops dating from the 1960s cooperative system were completely demolished, only a stone's throw from the house. "This is diffused gentrification, which is gradually changing the social fabric", Layla Riahi continues.

For Sana Ben Achour, professor of public law at Carthage University and president of the Beity association, "it is clear that this case regarding this house is a matter of land speculation, given its ideal location. There have to be limits to these speculative activities, when they are confronted with social necessities".

Collection of texts concerning the relationship between landlords and tenants. (Fr)

In Tunisia, the law concerning the "relationship between landlords and tenants of premises for residential use" dates back to 1976. It aims to protect low-income tenants by guaranteeing them the right to remain in their dwelling if it was built before 1970.

Collection of texts concerning the relationship between landlords and tenants. (Fr)

In accordance with this law, Mehrezia is occupying her home by right. "However, this law also grants the owner the right to repossess the property, if he has obtained permission to demolish the house", adds Sana Ben Achour. "The owner can then let the property deteriorate, and claim before the authorities that it is in danger of collapsing, in order to repossess it for construction purposes."

"This law is deceptive, it turns against the tenants and is the cause of these tragedies and evictions."

"But beyond the law, there are still principles that cannot be ignored: whoever the occupant is, whether a tenant or a squatter, they cannot be evicted without first providing them with adequate housing. Mehrezia has lived in Ariana for more than half a century, she has her bearings and her community there. She cannot be sent just anywhere", Sana Ben Achour argues. 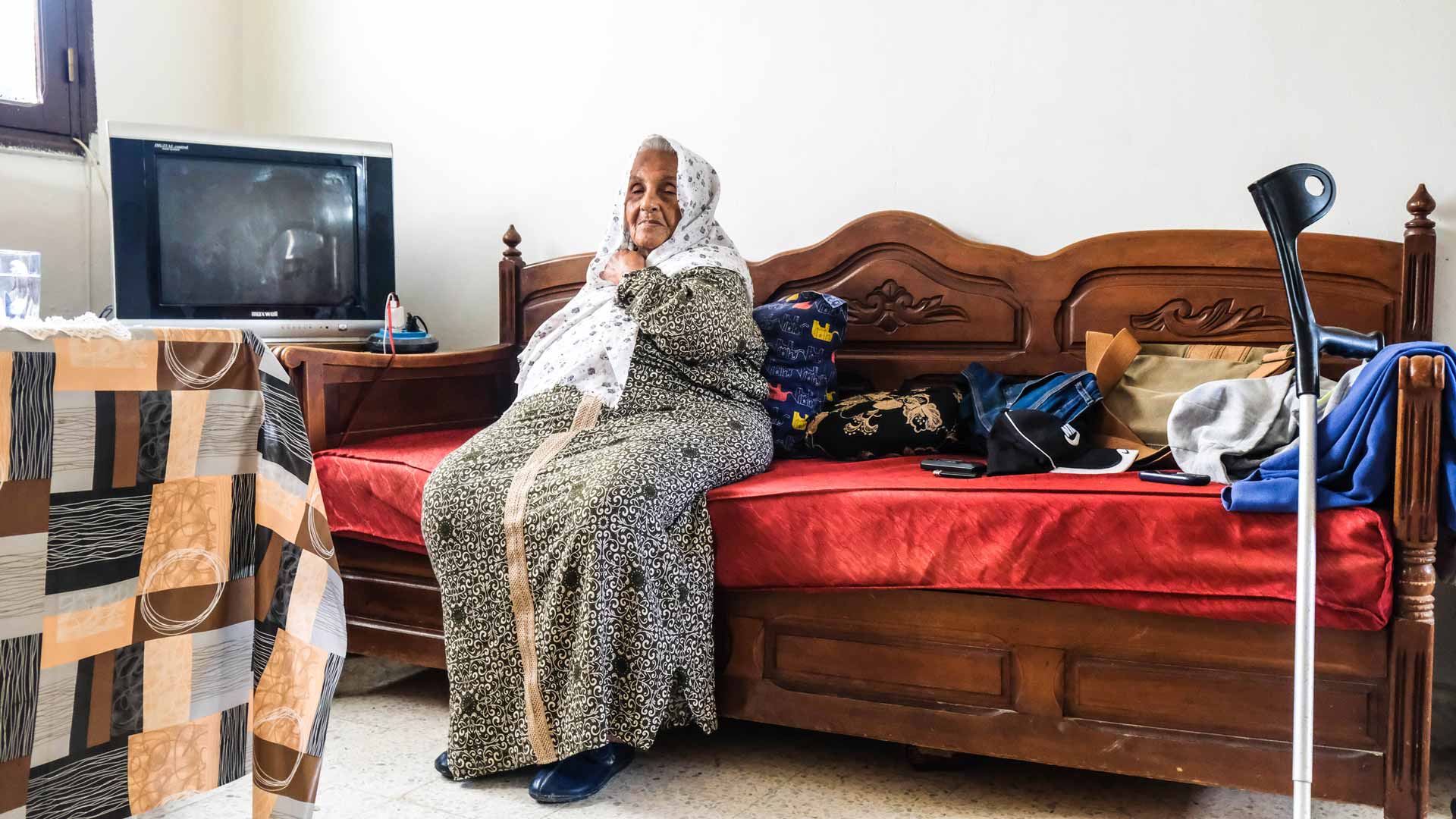 Mehrezia, 86, is now living with one of her daughters. Her only wish is to be independent again.

The family called on the governor of Ariana, Samir Abdeljaouad, to find a solution for Mehrezia and their family. His response: "She should live with her daughters or in a retirement home", says Rania. "The state should guarantee autonomy, not dependency", Rania indignantly declares. "My grandmother can't bear to be a burden on her daughters". Both the family's lawyers and those from the Beity association are now working hard to defend her right to adequate housing.

Furthermore, "it should be forbidden to evict in times of Covid, but there is no law that provides such a truce", Sana Ben Achour explains. According to information provided by activist journalist Ghassen Ben Khelifa, Sarra's sister Raoudha, who suffers from chronic illness, contracted covid after the eviction. The family has already filed a complaint for endangering the health of people at risk during a pandemic. "They ask us to stay at home and then they kick us out", Rania points out.