Ouled Jaballah: A Farmers’ Uprising Against the ‘Lords’ of Livestock

Since February 10, 2021, farmers from the region of Ouled Jaballah, a few kilometers from Mahdia, have been protesting against the rising price of compound fodder, an essential component of cattle feed. The protesters are accusing certain companies in the industry of strangling the market. Inkyfada went to meet the protesters.
Written by
Aida DelpuechEmna Mornagui
| 25 February 2021 | 10 minutes | Available in ArabicFrench
*Compound fodder is made up of barley, wheat bran, soybean meal, corn, and a combination of vitamins and minerals. It is used to supplement the hay and grass fed to cows.

Increasingly furious, the crowd rapidly advanced towards the National Guard on the main road. Local residents as well as the high school students of Mellouleche who had been let out of class for the occasion, joined the proceedings, brandishing placards and chanting slogans. The demonstrators came together to dump entire bags of tear gas cartridges in front of the National Guard post. These were the telling remnants of the violent police repression against the farmers of Ouled Jaballah between February 10 and 14, during which access to their village was blocked.

*Compound fodder is made up of barley, wheat bran, soybean meal, corn, and a combination of vitamins and minerals. It is used to supplement the hay and grass fed to cows.
0:00 0:00
The farmers of Ouled Jaballah and the surrounding area gathered in front of the Mellouleche district office. The poster on the right reads: "A government that impoverishes its farmers is a government that starves its people. It does not represent us.".

It all began on February 10, 2021. For two months, the price of fodder kept increasing with no reaction from the local authorities. Provoked by this silence, the farmers of Ouled Jaballah sharpened their tone: " In Mahdia, the governor refused to meet us. When we returned, we decided to prevent access to the village and to hold a sit-in at the village junction", says young farmer Mohamed Mechri. As a result, the farmers of Ouled Jaballah began coordinating retaliations. That day, three people were arrested following confrontations with the police.

0:00 0:00
Remains of the roadblocks set up by the Ouled Jaballah farmers' collective, on the road from Mellouleche to Ouled Jaballah.

The following day, the whole village (women and children included), joined the sit-in, and during the following days, violence ensued. " On February 11, the police arrived in the early morning. We were still at home when they started firing tear gas and rubber bullets towards the houses. They entered private homes and arrested three people. We retaliated with stones", says Bilel Mechri, spokesman for the movement. "They chased us like rabbits and aimed directly at us from 30 meters away. They even hit and seriously injured the foot of one of the women who were harvesting peas."

"The cameras never come here, the cops do what they want", says Bilel.

Houssem*, a young farmer from Ouled Jaballah, recalls the police violence and the circumstances of his arrest: "I have a heart condition and can't run. They grabbed me, hit me, and took me to the station in Mahdia. It was violent. Each time a policeman entered my cell, he systematically beat me. They refused to allow me to hire a lawyer and would not give me the medication that a relative had brought for me."

"WE DON'T WANT MONEY, WE WANT THE MONOPOLIES TO DISAPPEAR."

In Ouled Jaballah, a small remote village in the governorate of Mahdia, each family has its own farm. Scattered among the olive orchards, the farms, which on average do not exceed 5 hectares, have focused their activity on the breeding of Holstein cows, imported from Europe. These small farmers are part of the many breeders who supply the big dairy companies such as Délice and Vitalait.

The revolt began in this unassuming village, the trigger point being the sudden and vast price increase of compound fodder, which is used as the basis of cattle feed. " The price of 50 kg of fodder was around 40 dinars before jumping to 52 dinars within a few weeks. We can no longer afford it!" exclaims Mabrouka, a 41 year-old farmer in the village. " My cows are hungry, the other day I had to feed them semolina", she continues.

0:00 0:00
In her stable, Mabrouka explains her outrage following the increase in the price of fodder.

On February 18, after the end of the demonstration in Mellouleche, the young farmers coordinating the protest met up at the only café in Ouled Jaballah, on the roadside, to discuss their demands and which strategy to follow. Their exchange got heated.

"Three families are behind the so-called ‘lords’: the Ben Ayed (SNA - Poulina), Belkhiria (Alco) and Chaabouni (Alfa). These three large companies share most of the market for compound fodder in the country [between them]", says Bilel, spokesman for the movement. 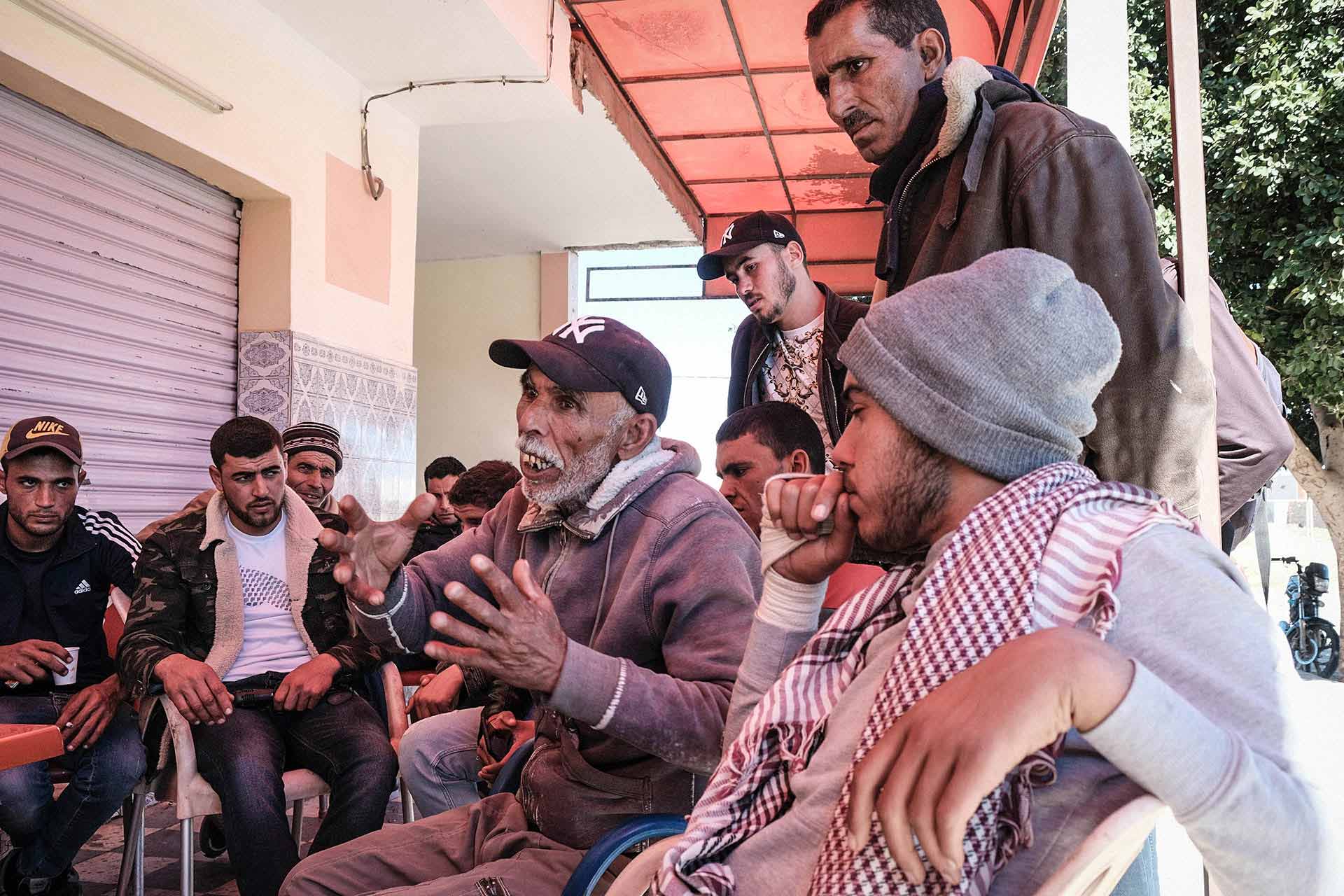 The farmers of Ouled Jaballah meet up at the café, near the location of the sit-in, to review their demands.

According to livestock farmer Mohamed Ali Halloues: "These companies prepare and distribute the compound fodder. There is an agreement between these three producers and the large company ‘Carthage grains’, for the soybean (which is a key ingredient of the fodder) to be exclusively sold to them at a negotiated price."

This fodder is then sold to the farmers through the milk collectors who, in addition to their primary work, also act as fodder intermediaries. "Once the fodder is prepared in the factory, it is sold in bulk to the milk collection centers", explains Hamdi Guiza, part of the coordination. The collectors take on this double task because the farmers “don’t have the means to travel; neither in order to sell [their] milk, nor to buy fodder for the animals".

"The problem is that the collectors take out margins on the fodder, even though they are subsidised by the state in order to deliver it to us. And if we refuse to buy it at the set prices, they threaten to stop buying our milk", he continues.

"In 2015, we created our own mutual company of livestock farmers", says the farmer and omda (area manager) of Mellouleche. "We filed an application with the governorate of Mahdia to set up our own milk collection center, to avoid dependence on collectors. But this was refused, on the grounds that there are too many collection centers." He then accuses some owners of these centres of voluntarily saturating the region, and thus preventing the creation of new centers. 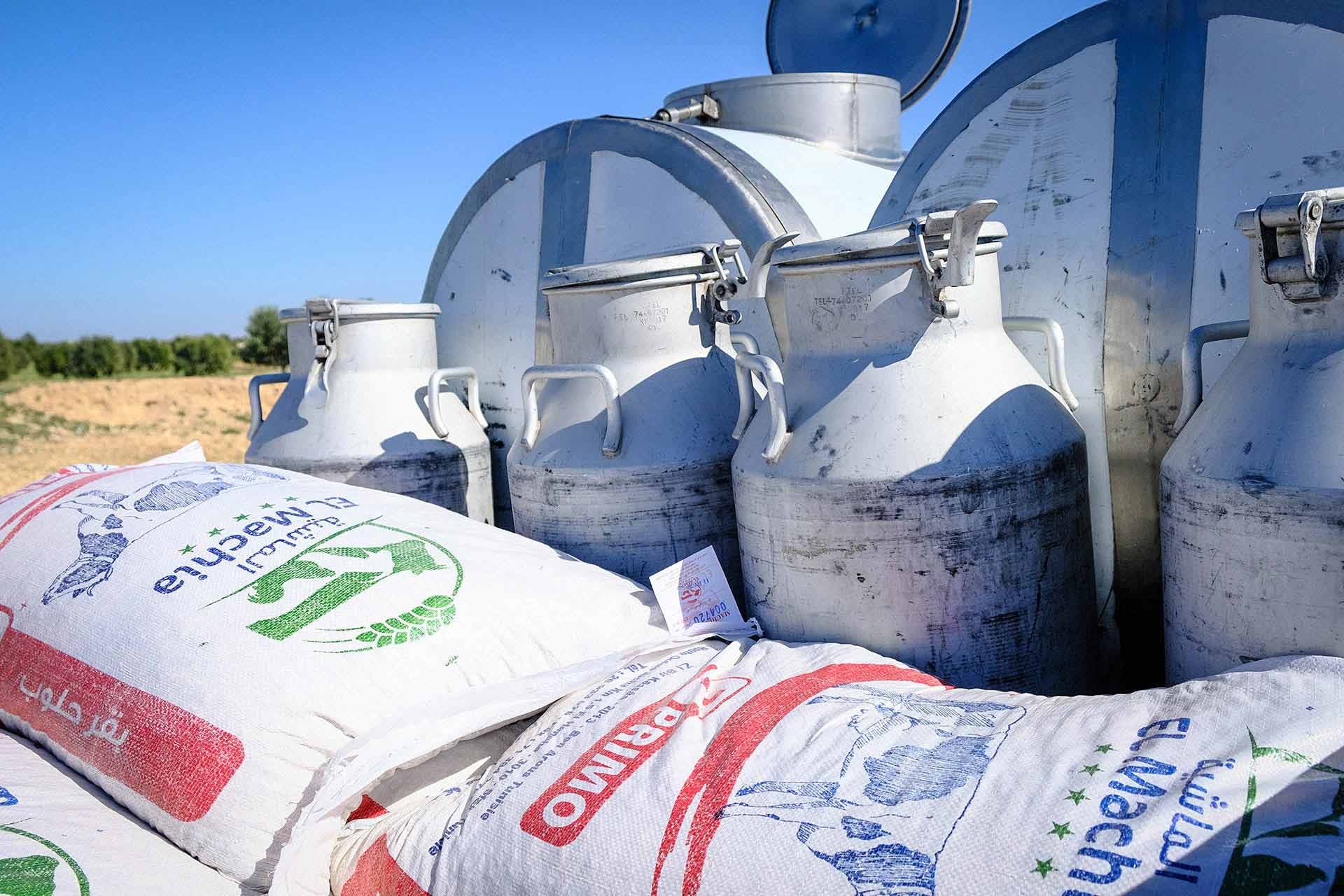 A milk collector’s trailer in Ouled Jaballah, loaded with milk containers and bags of fodder for livestock...

In a statement dated February 10, the coordination of Ouled Jaballah farmers called for state intervention to regulate the profit margin of the feed industry ‘lords’.

"There is no control in this country! These private individuals are stealing from us through increasing prices, and no one stops them", says Mabrouka.

"We ask the state to intervene. UTAP [the largest agricultural union in the country] does not represent us. It defends the interests of the corruption ‘lords’ and the large-scale producers", Mohamed asserts.

The statement also calls on the state to stop importing red meat, and asks that the budget allocated for this be redirected to small-scale producers: "With Covid-19 and the decline in living standards, people are not buying meat anymore; it has become too expensive. And yet, Tunisia continues to import it, while we cannot even sell our own meat" says Bilel. 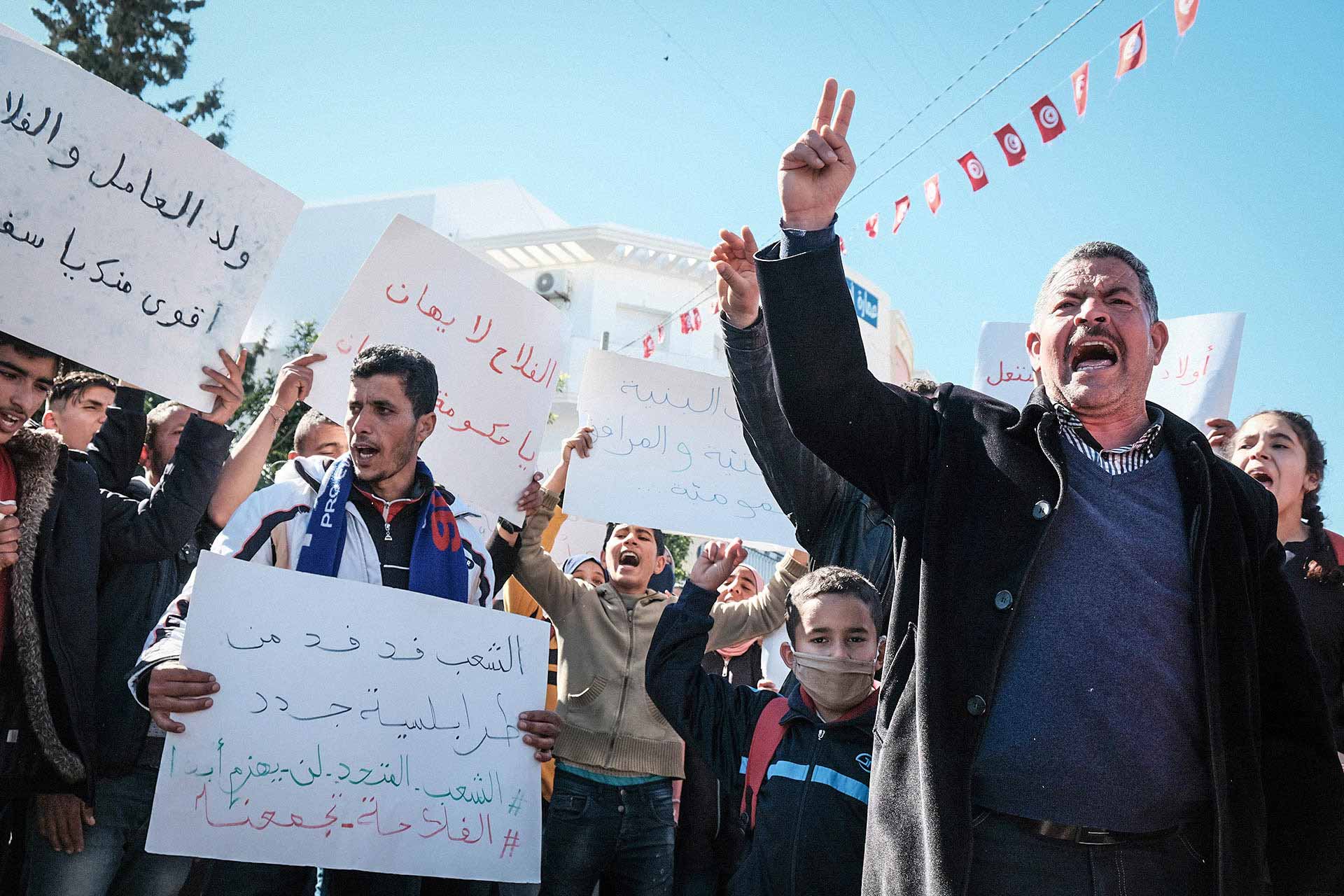 Many residents of Mellouleche joined the demonstration on February 18, 2021.

Since then, more and more farmers from the surrounding villages have joined the struggle, also resorting to road-blocks. Following a negotiation meeting on February 15 in the presence of the governor of Mahdia, the authorities were given 15 days to respond to the demands of the livestock farmers.

"If we are not listened to, we will escalate the fight", they vowed.

0:00 0:00
The crowd of demonstrators approaches the National Guard post of Mellouleche during the rally of February 18, 2021.

*Some names have been changed to respect anonymity.
This article was written respecting gender-sensitive grammar.