What is the link between Olympic champion Habiba Ghribi and the U.S. Treasury Department's Financial Crimes Enforcement Network (FinCEN)? Based on confidential reports, this investigation reveals how U.S. banks took years to report suspicious transfers amounting to millions of dollars linked to one of the biggest doping scandals in the history of sport. The Tunisian athlete is one of the main victims of this injustice.
Written by
Monia Ben HamadiMalek KhadhraouiWill Fitzgibbon
| 20 September 2020 | 12 minutes

This new information comes mainly from a secret financial database obtained by BuzzFeed News and shared with the International Consortium of Investigative Journalists (ICIJ), of which Inkyfada is a member. The disclosed documents, called "FinCEN Files," include more than 2,100 suspicious activity reports written by banks and other financial actors and submitted to the U.S. Treasury Department's Financial Crimes Network (FinCEN). Thanks to the collaboration between ICIJ members, additional documents and information have been obtained.

These documents show how Lamine Diack, former president of the International Athletics Federation (World Athletics, formerly IAAF), his son Papa Massata Diack and Valentin Balakhnichev, former president of the Russian Federation - with the help of numerous collaborators and accomplices - were able to set up a complex system of corruption, extortion and embezzlement of money (via several intermediary companies), which led to the doping scandal of Russian athletes.

Inkyfada and its partners have had access to confidential financial reports proving that millions of dollars were transferred through major international banks to the accounts of companies or individuals based in Senegal, Russia, Monaco, China, Singapore or Paris and linked to the main defendants or their networks.

The FinCEN Files reveal that it is only after the scandal breaks (2014-2015) that suspicious activity reports (SARs) will be forwarded to the U.S. Treasury by international banks. In these reports, hundreds of "suspicious" transfers are listed, notably by Citibank in 2016, covering the period from 2007 to 2015. These transfers particularly concern the company "Pamodzi Consulting," which owns several subsidiaries, including one registered in Dakar, Senegal, and whose owner is none other than Papa Massata Diack.

The SARs show how the inability of banks and other financial institutions to thwart the flow of illicit money encourages large-scale crime and makes many collateral victims.

Consolidated by numerous elements of the judicial investigation opened in Paris against Lamine Diack and his accomplices, as well as additional suspicious activity reports - obtained by a journalist from Radio France, a member of ICIJ - this information sheds light on the scale of the scandal: millions of dollars embezzled or paid in bribes. The money not only allowed Lamine Diack, his son and their network to enrich themselves, but also and above all allowed the slowing down of suspension proceedings against Russian athletes accused of doping, between 2010 and 2015.

High-ranking officials in Russia, including the former President of the Russian Athletics Federation, Valentin Balakhnichev, have made the awarding of sponsorship contracts worth tens of millions of dollars (including payments from a major state bank, VTB BANK) conditional on the suspension of sanctions against their athletes in order to allow them to participate in the London 2012 Olympic Games and, for some, the Moscow World Championships in 2013.

Among these athletes is Yuliya Zaripova. In 2011 and 2012, she deprives Habiba Ghribi of two gold medals, during the World Championships in Daegu and the Olympic Games in London, respectively. At that time, strong suspicions of doping were already hanging over her, but the procedure was deliberately slowed down. Both the IAAF and the Russian sports authorities are trying to save time.

According to elements of the French investigation, Zaripova would have been one of the 6 Russian athletes who would have been asked to pay hundreds of thousands of euros to benefit from "total protection" in order to keep her titles and avoid heavy sanctions, among others through Papa Massata Diack and his father, then president of the IAAF. Diack's son, a refugee in Senegal and the subject of an international arrest warrant, denies these accusations.

On September 20th, Lamine Diack was sentenced to four years in prison, including two years in prison for his involvement in the corruption network aimed at slowing down the sanctions against Russian athletes accused of doping. He was also sentenced to pay a fine of 500,000 euros, a derisory sum compared to the millions of dollars that he and his sons are accused of embezzling, part of which is contained in the FinCEN Files. He has appealed the judgment and remains at liberty.

Habiba Ghribi, for her part, will not finally recover her titles until 2016. But the damage is already done.

HUNDREDS OF THOUSANDS OF DOLLARS LOST FOR HABIBA GHRIBI 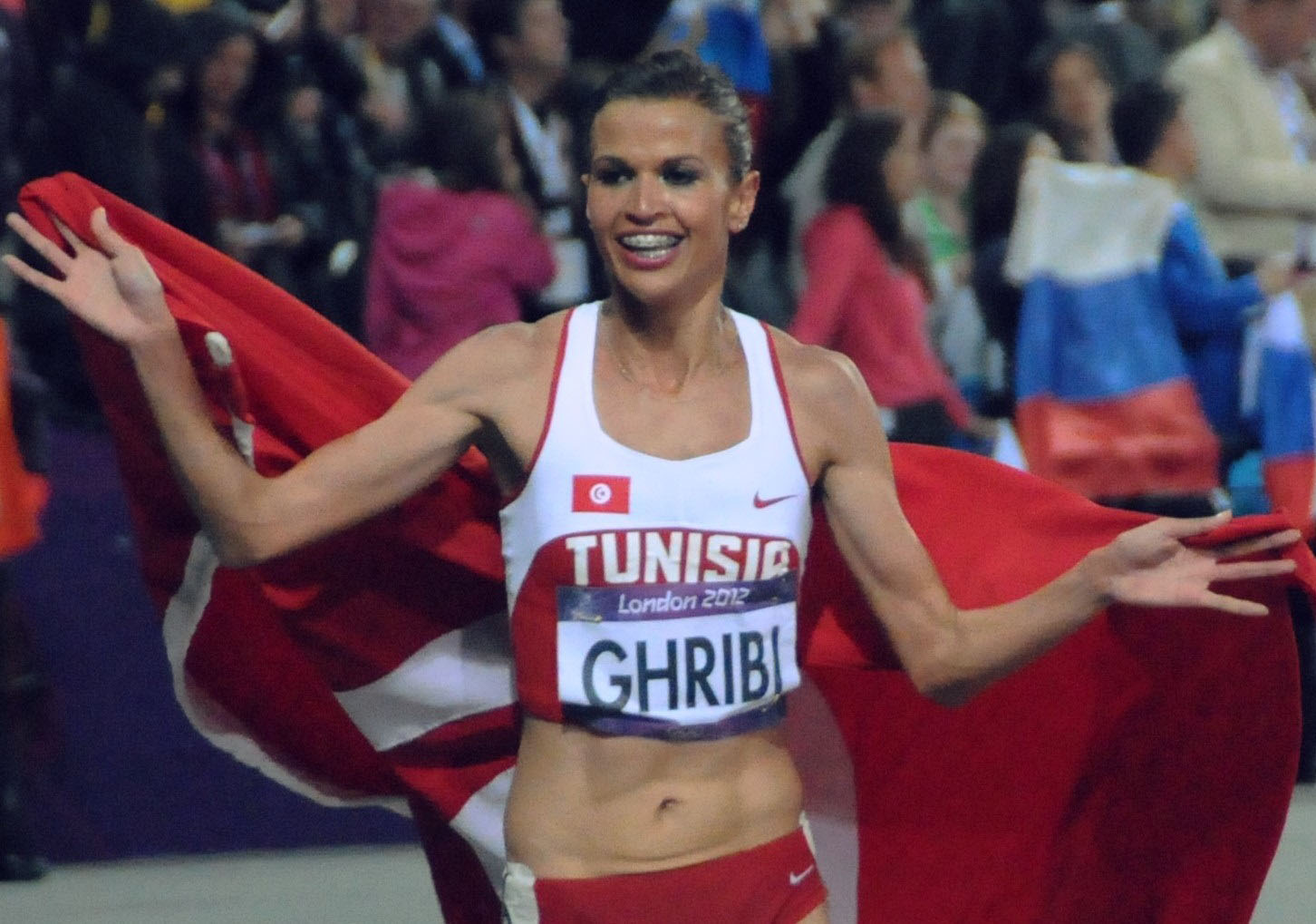 Habiba Ghribi celebrating her Olympic silver medal in London (medal which will be transformed into gold after the disqualification of the Russian Yuliya Zaripova). Credit: Citizen59, under Creative Commons license,

It is on the sidelines of the Mediterranean Athletics Championship organized at the Rades Stadium in Tunis that the ceremony of restitution of her two medals took place on June 4, 2016. Habiba Ghribi was then preparing for the Olympic Games in Rio. Four years have therefore passed and the athlete still has a bitter taste of what she has called injustice in an interview with Inkyfada.

"The ceremony was not up to the task. I stood alone on a podium. I wanted all the athletes to get their medals back, I wanted a real ceremony," she lamented.

Hearing the Tunisian national anthem during the Olympic Games is what Habiba Ghribi asks above all. And she does not lose hope. "We will try, via our Olympic Committee, to make this request to the International Committee so that this ceremony is reproduced during the Tokyo Olympics," postponed to 2021 because of the COVID-19 pandemic.

But beyond the symbolic aspect, the Tunisian champion has also lost a lot of money. If the difference in price awarded between a gold medal and a silver medal was returned to her in part by the Tunisian government and Olympic Committee, Habiba Ghribi estimates the losses caused by this “injustice” to be at a few hundred thousand dollars.

"There’s the bonus of 38,000 dollars. If the IAAF recognizes the medals, it must also redistribute the money that goes with it. It doesn't matter if the money is taken back from the states or the athletes, it's not our problem. The Federation must take responsibility," the athlete castigates.

But this sum constitutes only a small part of the financial losses caused. Ghribi evokes in particular the contracts of sponsoring with the sports equipment manufacturers or the bonuses of participation in various meetings: "These contracts and other bonuses were granted on the basis of a silver medal. Over five years, we lost a lot of money."

Twenty to thirty thousand dollars for a meeting, several tens of thousands of dollars paid by sponsors... The amounts offered to the champions differ significantly from those to which the vice-champions are entitled. But Habiba Ghribi doesn't intend to fight to recover her due. "I took the medals and so much for the money," she said, adding that she feared possible reprisals.

"I didn't want to make a polemic and bring the case to court to ask for damages. I didn't want to get into trouble afterwards, you never know what you might get into. It's still an injustice."

While the sum of her own calculations were large, the Tunisian athlete was unaware at the time that she had been the victim of a much more powerful and successful apparatus of corruption and embezzlement for Lamine Diack, Papa Massata Diack and other Russian officials. Through commercial contracts or concessions of exploitation rights granted directly by the IAAF, but also by demanding bribes from some of the athletes guilty of doping in exchange for their protection, it is no longer hundreds of thousands, but tens of millions of dollars that are at stake.

32.9 MILLION DOLLARS, FROM RUSSIA TO SENEGAL 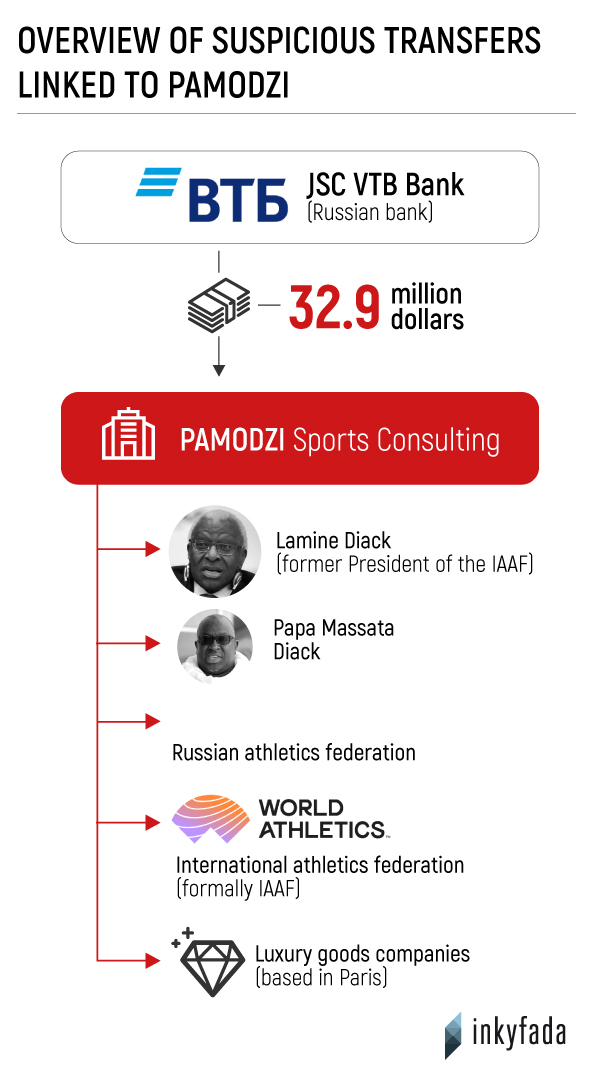 The former president of the International Athletics Federation admits it himself to the investigators in charge of the judicial investigation in France. The renewal of the contract between a major Russian state bank and the IAAF is a priority. The sanctions procedure will wait at least until after the Olympic Games in London.

"Dollé" is none other than Gabriel Dollé, the former head of anti-doping within the Federation. According to the latter's statements, Lamine Diack and Valentin Balakhnichev, former President of the Russian Federation and IAAF Treasurer, would have convinced him not to take immediate disciplinary action over the discovery of doping cases in several Russian athletes. "Important financial interests for the future of the IAAF, which was in financial difficulties, were at stake," he reported.

Yet the IAAF will not be the only (or even the main) beneficiary of this contract with the Russian sponsor. Between the two, several companies play the role of intermediaries, including AMS in Switzerland or Pamodzi Consulting in Senegal. According to reports in the FinCEN Files, the latter company, owned by Papa Massata Diack, received a total of $32.9 million in five payments between March 2, 2011 and January 20, 2015. This amount corresponds to the sponsorship contract over a five-year period. During the same period, the sanction proceedings against doped Russian athletes were suspended or slowed down.

Still according to the suspicious activity reports and the instruction of the French judges, the sums subsequently paid back to the International Athletics Federation are very small compared to the global amount. A whole system of intermediaries, subcontracting, commercial contracts, very high commissions and invoicing was set up to divert the money owed to the IAAF in favor of Diack father and son, Valentin Balakhnichev and their partners and accomplices.

In February 2013, for example, for 72 hours, Pamodzi Consulting paid $1.25 million to an unusual network of clients: a Parisian jeweler, Lamine Diack, a Russian sports federation and a retailer selling watches, perfumes and luxury beauty products.

FINANCIAL FLOWS OUT OF CONTROL 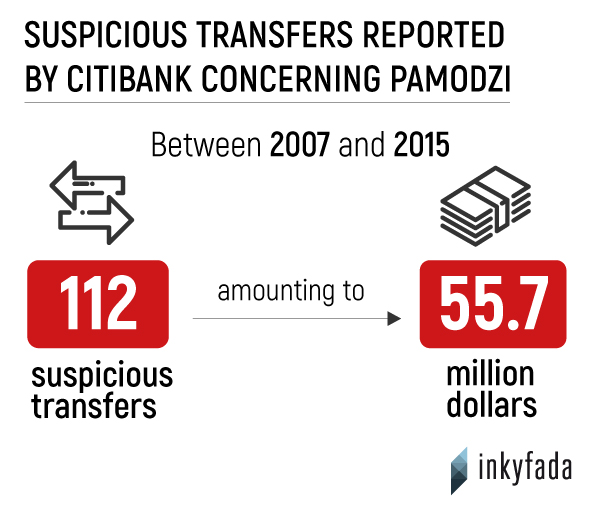 It wasn't until October 2016 that Citibank finally sent the U.S. Treasury Department's Financial Crimes Enforcement Network (FinCEN) a list of 112 suspicious transactions related to Pamodzi, spread over the period of 2007 to 2015. The last transfer was made shortly before the indictment of Lamine and Papa Massata Diack, as well as other protagonists involved in the Russian doping scandal.

The reporting of these transfers, which totaled $55.7 million, therefore occurred long after the scandal broke and even after the sanctions against Russian athletes were effective and the main instigators were worried.

For years, the bank had witnessed payments - in London, Singapore, Doha, Moscow, Beijing and elsewhere - which, according to experts, should have alerted the bankers and their supervisory bodies much earlier.

"If the money goes to consulting firms with no employees, to luxury stores, it raises suspicion," sports governance expert Roger Pielke told ICIJ. "It's not necessarily the money circulating in the world that's the problem, but the combination of that money and where it goes.”

The reports - dense, technical newsletters - are the most detailed U.S. Treasury records ever released. They describe uncontrolled transfers of dirty money around the world.

The money reported to FinCEN was only part of a deluge of dollars, francs, rubles, renminbi and euros that allegedly ended up in the pockets of coaches, doctors, administrators and government ministers in one of the biggest scandals in the history of sport. Along the way, Habiba Ghribi and many other athletes were robbed of their dreams.

This survey was conducted with the collaboration of Abdelhak El-Idrissi (Radio France) and many member journalists of the ICIJ.