For the Gabès chemical group, a population is sacrificed

In the Gabès sky, smoke from the Tunisian Chemical Group (GCT) rises up into toxic clouds. Every day, this pollution engulfs the city and suffocates the inhabitants. For years, farmers, workers, and activists have been mobilizing against the factory’s harmful practices. In their ongoing struggle, many citizens of Gabès refuse to resign.
Written by
Hortense Lac
| 12 November 2019 |

As a factory worker, Hichem* travels to the Tunisian Chemical Group's plant every day. The young man, who joined the Group several months ago, describes the working conditions in one of their phosphate processing units. "Inside, you can't see a meter ahead because of the gas. We can’t even see the other workers.” He and his coworkers constantly breathe in all kinds of pollutants: fine particles, sulphur oxides, ammonia... all of which pose many health risks.

Despite the danger, Hichem has no suitable equipment to protect himself. "We don't even have a mask!," exclaims the young man. He points out his construction pants and safety shoes, which he had to purchase himself. But from Tunis, a manager of the Chemical Group claims that everything is done to ensure employees’ protection: equipment, safety training days, etc.

Hichem hesitated for a long time before joining the GCT. Like all Gabès residents, he knows the risks associated with this work. But after an unsuccessful, months-long job search, and finding himself in a precarious situation, the thirty-year-old gave in. "The people who work here are forced to accept these conditions, all they want is a job," he says.

Like many of his colleagues, Hichem has neither social security coverage nor a risk premium. His contract, he explains, was drawn up by a subcontracting company, not by the Chemical Group directly. According to him, this arrangement prevents him from benefiting from any advantages.

At the end of the day, Hichem walks back to his home, which is just a few minutes from the industrial area. Even there, the Chemical Group controls his air. The thick, odorous smoke leaves the factory chimneys and slowly travels down to his house.

"You can't even sleep with the window open because the smell is so strong."

But the worst time is during "degassing," when the plant expels a large quantity of chemicals in order to clean and restart the units. "It smells so strong that employees can't even work," says Hichem.

When these harmful products are released into the air, they spread into the surrounding area and into the city. And this doesn’t happen without consequences, declares Khayreddine Debaya, a coordinator for the Stop Pollution movement against the GCT.

"Orange smoke escapes from a Tunisian industrial zone: 'It was a real sight of horror'"

On January 22nd, 2019, Debaya posted videos online showing thick orange smoke coming from one of the Chemical Group's chimneys. At the time, many of Gabès' residents, particularly in the town of Ghannouch, were experiencing breathing difficulties. In addressing the outcry that resulted, the National Environmental Protection Agency (ANPE) stated that the weather conditions had not permitted the gases released from a degasification to diffuse into the air.

Normally, the GCT should only conduct around one 'degassing' per year, claims one of the plant’s environmental managers. But currently, these operations take place every three months. The same manager explains that this is due to a lack of regular phosphate deliveries, which is necessary for the proper functioning of the units. This lack of raw material requires the plant to restart their operations more often, which requires a degasification process.

In Gabès, air pollution scandals follow one after another. Khayreddine Debaya recalls that two years prior, in May 2017, primary school students near to the factories were asphyxiated. While they sat in class on a Saturday morning, a factory released a large quantity of gas — more than usual.

Immediately, several students started to cough and vomit. Some of them were rushed to the hospital. Residents placed blame between the Chemical Group and the power plant. But that day, the whole of the region’s industrial complex seemed guilty. 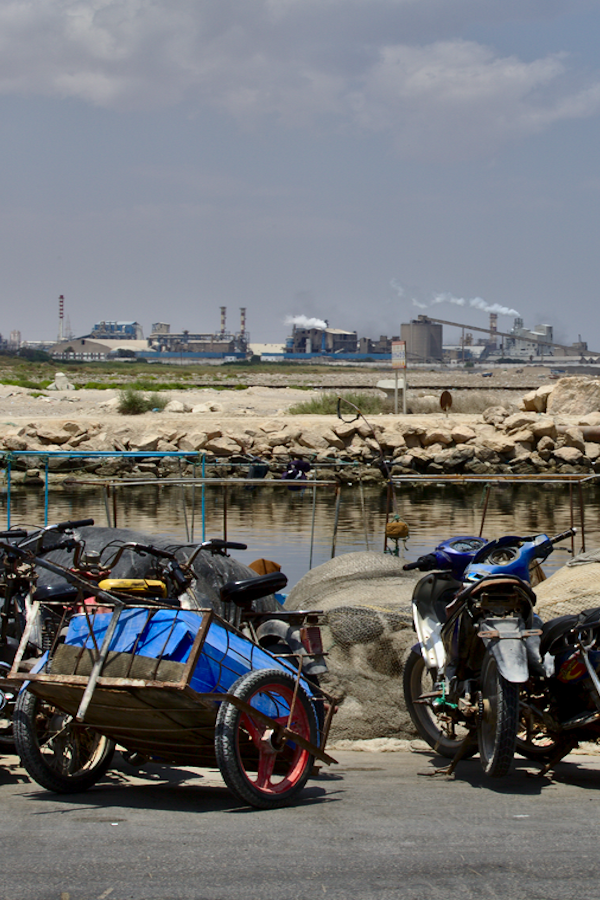 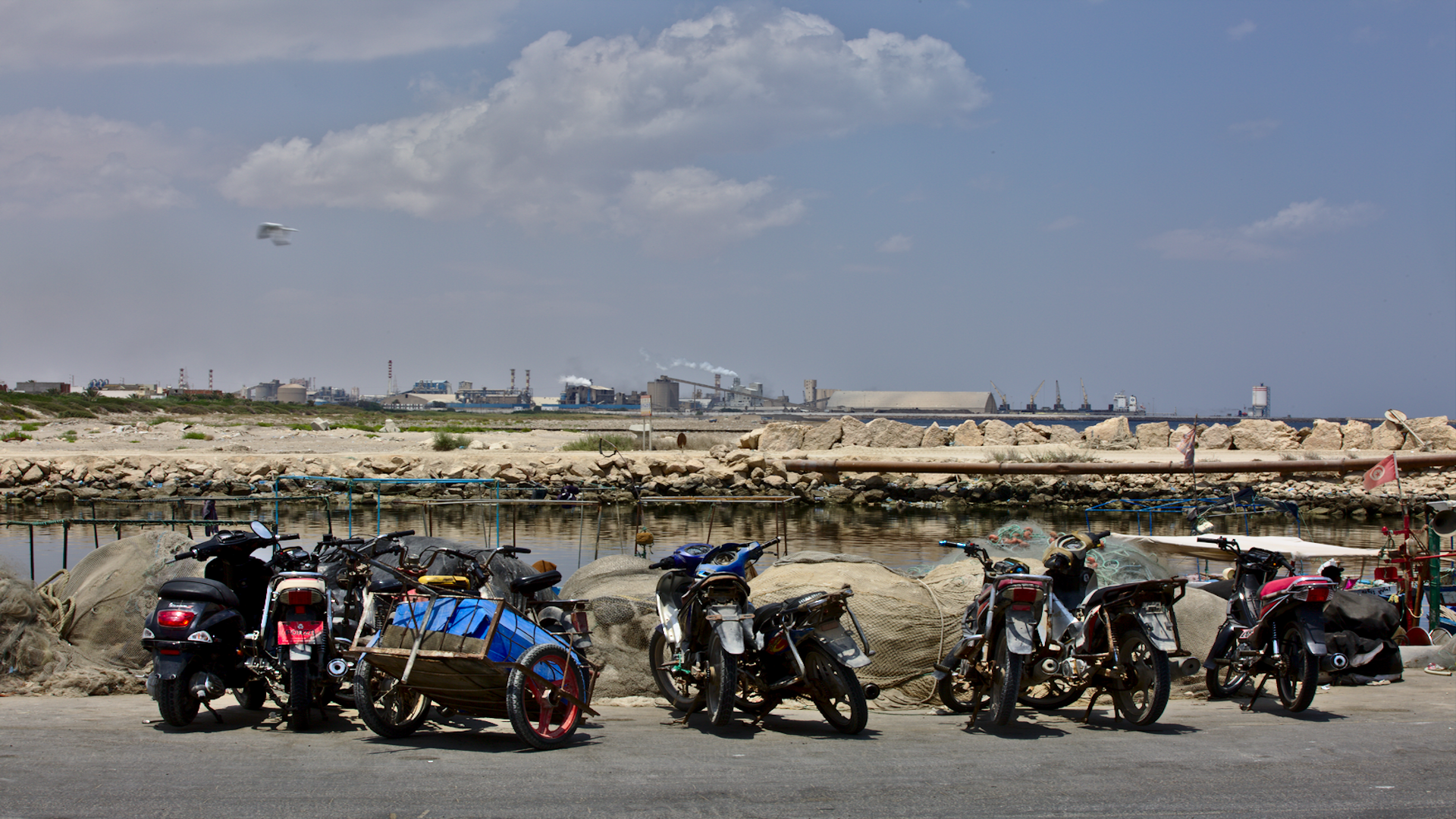 From the port, fishermen observe the industrial area. In addition to polluting the air, the GCT also releases toxic waste into the sea.

Fatma also lives in walking distance to the industrial zone. Every day from her window, she sees the GCT chimneys blowing out orange and white smoke. Depending on the direction of the wind, the smoke spreads over homes and diffuses nauseating odors.

"The pollution has almost turned us into the walking dead. Just look at the state of our faces," says the mother.

Once inside, Fatma closes the windows and doors to protect herself from smoke emissions as much as possible. She and her family used to live even closer to the industrial area. They moved in the hopes of reducing the impact of pollution on their daily lives, but without success.

According to a March 2018 study of the European Union, the Tunisian Chemical Group emits 95% of the city's air pollution. The United Nations Environment Program also singles out Gabès, classifying the governorate as one of the "pollution hotspots" of the Mediterranean. 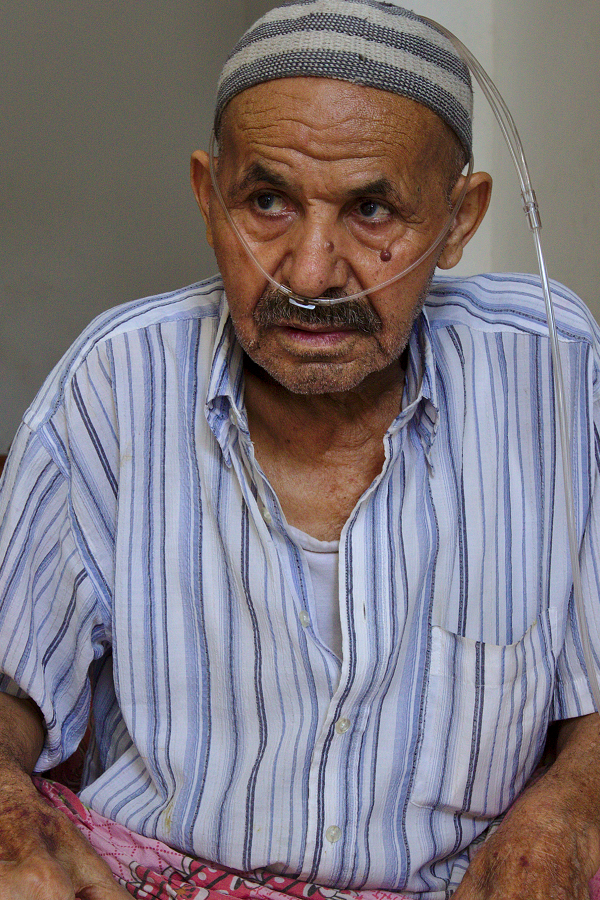 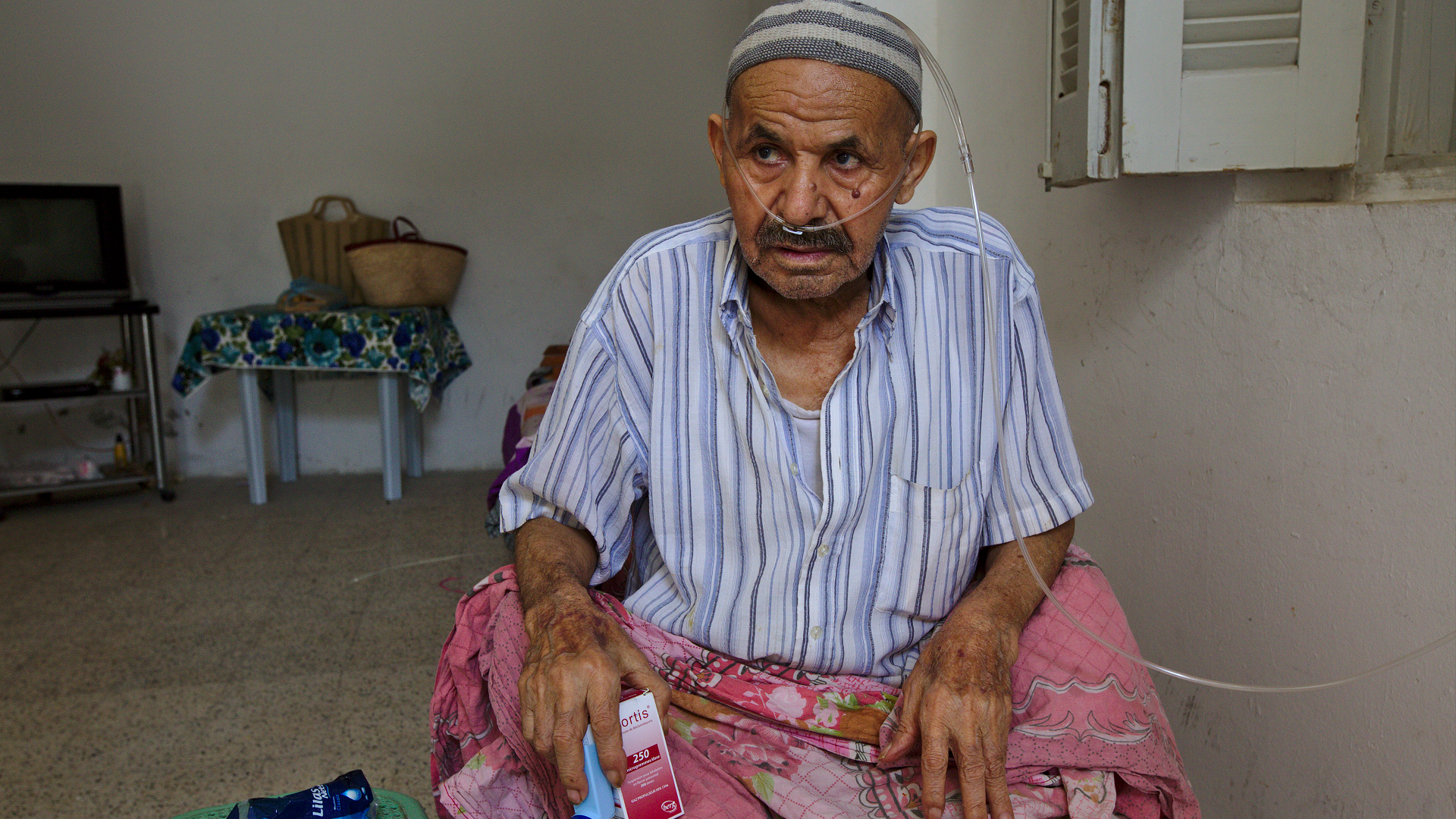 Khelifa, a former employee of the Chemical Group, lives a few dozen meters from the industrial zone. For years, the retiree has not separated from his oxygen machine or inhaler.

"By breathing this pollution, you’re doomed," Khelifa says with a struggle. The retiree lives in the same area as Fatma. He is permanently connected to an oxygen device because of his respiratory failure. His inhaler, which treats his asthma, is never out of arm’s reach. According to doctors, his health issues can be traced to his long career with the Chemical Group.

Fatma knows many people who developed respiratory failure or cancer in this area; some are no longer alive. For her, these diseases are a result of this pollution. "Even children are affected," she adds. At her side, a neighbor nods along and — between two coughs — confirms.

The European Union study indicates that exposure to the Chemical Group's pollutants can cause asthma, lung cancer, and premature death. In addition to health impacts, this pollution has effects on the environment. The release of sulphur dioxide into the air causes "leaf necrosis and can lead to plant death."

"There is a type of gas produced by the Chemical Group that burns the leaves of palm trees," claims Saâd, who comes from a family of farmers. "And all the fruits have a burnt, dried-up appearance."

Behind the industrial zone, a woman shows her corn crops, most of which have completely yellowed. For years, she has been pushed to use more and more pesticides and fertilizers to strengthen the resistance of her crops and try to limit losses. 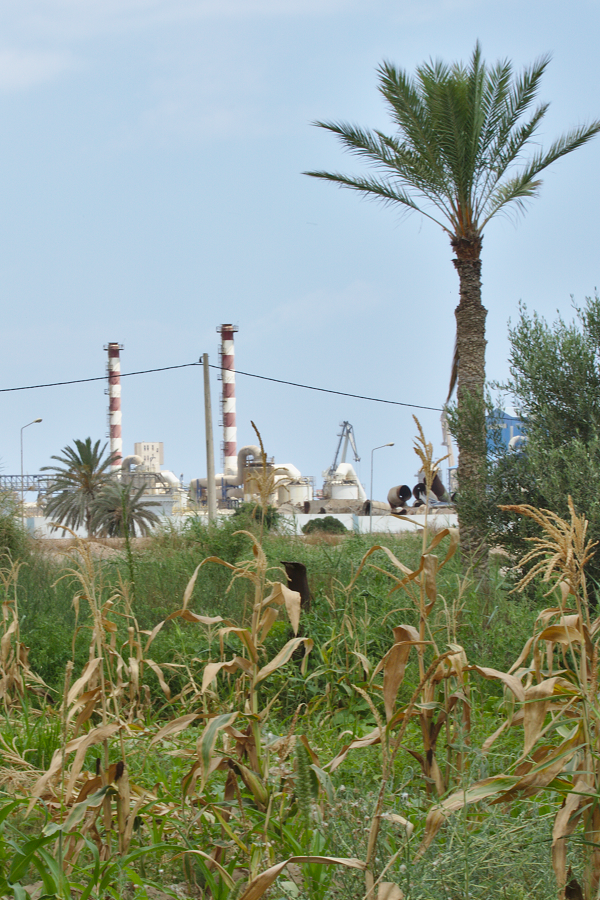 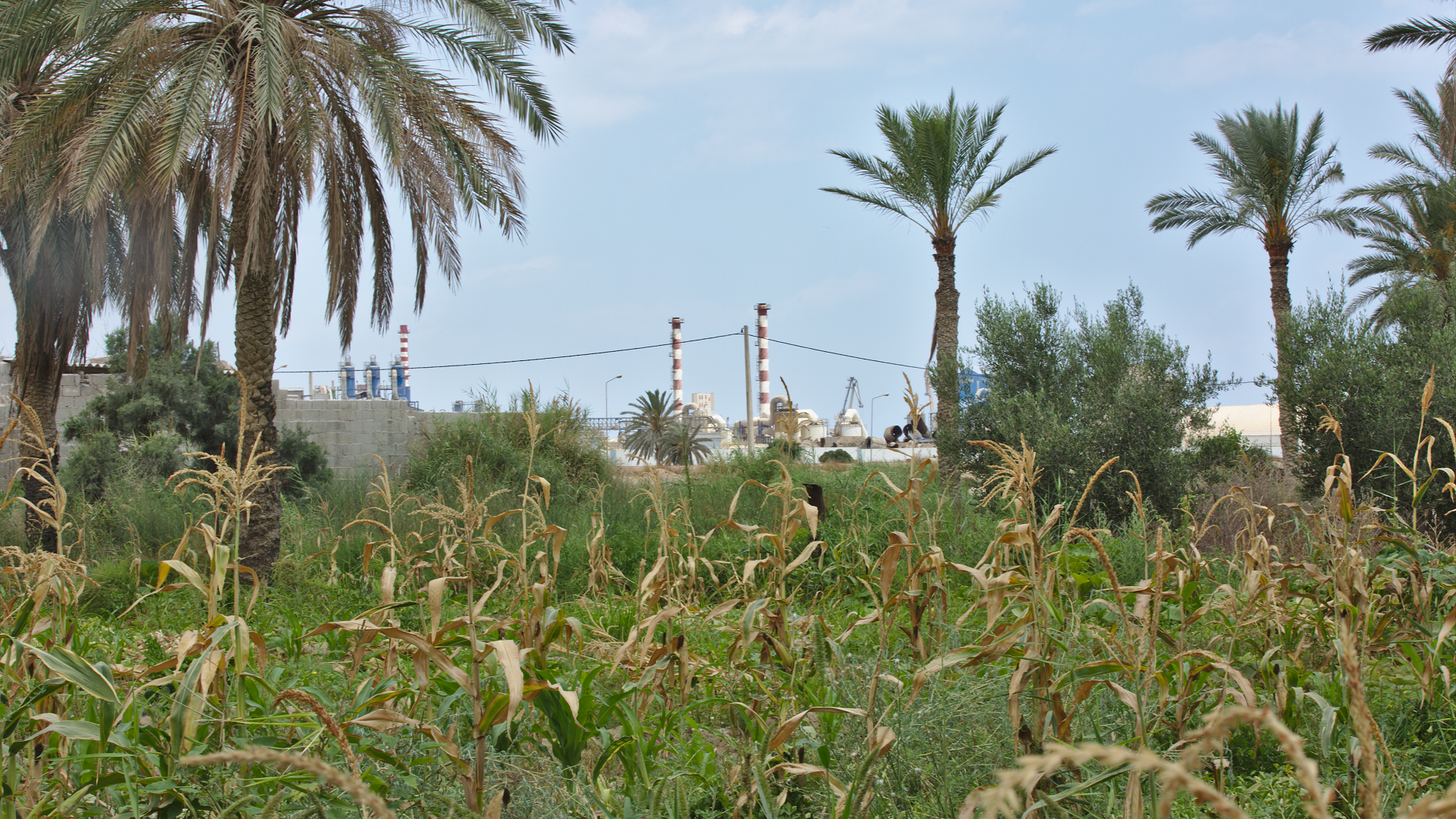 Near the industrial zone, farmers claim that GCT pollution affects and destroys their crops. Corn stalks are difficult to grow and their ears "burn" before they even reach maturity.

THE INHABITANTS FIGHT BACK

Refusing to look past the GCT’s harmful practices, the people — and especially the youth — of Gabès decided to oppose the industrial giant. For nearly ten years, the Stop Pollution campaign and other social movements have regularly organized marches and other actions that continually draw crowds of hundreds.

"For everyone here, the first subject is pollution, not unemployment," says Khayreddine Debaya.

Although Fatma participates in almost all of the demonstrations, she remains pessimistic and believes that these initiatives "won’t change anything." She also blames politicians who do nothing for Gabès. "No one comes to us! Except during election times," Fatma says, outraged.

For the past two years, both local and national authorities have made numerous promises, unaccompanied by action. In June 2017, following protests, it was announced that the Chemical Group would be relocated. An eight-year plan with specific deadlines was drawn up, and a new site was set to be declared on December 31st, 2017.

It was not until 2019 that the authorities finally found a new location for the company: Menzel El Habib, about 50 kilometres away. Since then, no plans have been set in motion. The GCT claims that the inhabitants of Menzel El Habib have refused to host these factories in their city.

But some of the damage done to Gabès can not be reversed. Relocating the plant would threaten the jobs of several hundred workers in an area where the GCT is one of the main employers and where the agriculture and fishing industries have been permanently damaged from pollution.

According to Khayreddine Debaya, the UGTT prefers to modernize systems within the current site so that it becomes less polluting, which would allow local residents to keep their jobs. But this proposal is not unanimously favored by the population. Meanwhile, the Gabès industrial zone continues to threaten the health of the region’s inhabitants and destroy the environment.

Inkyfada contacted the ANPE to get a statement on the situation in Gabès, but the agency did not provide a statement.

*First names have been changed to protect anonymity.

I cover topics related to society, health, and human rights.