The Constitution and referendum: unsustainable delays, tensions and malfunctions

One year after assuming full powers, Kaïs Saied is implementing his promises: drafting a new Constitution as well as a referendum that will, according to him, "give the people power". Organised in barely two months, several malfunctions have hindered the process.
Written by
Haïfa Mzalouat
| 01 August 2022 |

In a matter of two months, a new constitution is supposed to be drafted, debated and approved by the Tunisian people. "The biggest problem is the timeline. A referendum is submitted less than a month after the Constitution draft has been written. According to international standards, this normally takes at least six weeks. Here it takes less than three weeks", says Zied Boussen, a researcher for the Arab Reform Initiative specialising in governance, public policy and human rights.

This process comes in a context of the dismantling of several institutions created after 2011 and 2014, as evidenced by the dissolution of the Supreme Judicial Council (SJC) last February. The judiciary has been further undermined by the dismissal of 57 magistrates via presidential decree, under the pretext of corruption, obstruction of investigations and even extramarital relationships.

What does the sudden dissolution of the Supreme Judicial Council mean?

In an act of support for his colleagues who went on strike following these dismissals, administrative judge Habib Rabai decided to leave the Independent High Electoral Authority (ISIE), just one month before the referendum.

The ISIE was not spared by the recent presidential measures. Since the decree-law of April 21, 2022, the President is in charge of appointing the seven members of the authority, further strengthening his executive control over institutions that are meant to be independent.

Within this particular context, inkyfada summarises the main issues surrounding this new legal text and the electoral process for the referendum.

An entire Constitution in a matter of weeks

Since May 19, 2022, the task of the "National Advisory Body for a New Republic" has been to draft the Constitution that will serve as the basis for the text that will be submitted to a referendum on July 25. The body is composed of:

The task of the first two commissions is to draft the first version of the new Constitution, and present it to the National Dialogue Commission on June 13.

The problem is that these Commissions are incomplete because several of the supposed members have refused to be part of them. The university deans of law and legal sciences in the legal commission invoked the "impartiality of the academic institutions" that they represent, and expressed their desire to keep them "away from political affairs". According to them, they are "entitled to an opinion expressed in their own name and not in the name of an institution, especially when they hold a position of responsibility".

As for the Economic and Social Commission, the UGTT considered the national dialogue to be a simple "formality where the roles are already determined unilaterally [by the President]", and which "excludes the civil forces". The general strike organised on June 16 denounced, among other things, this lack of a national dialogue. Thus, the UGTT did not wish to participate in a commission that only had a "consultative role".

"In the end, it is a consultative commission", Zied Boussen confirms. "It's not like with an MP. There is no accountability."

In comparison, during the 2014 Constitutional debate (which lasted over two years), each chapter of the text was studied by an individual committee. In total, six committees* studied and debated the text, with several consultations taking place during the process. These processes were very different - the Constituent Assembly was an open hemicycle, composed of political representatives, and the drafting of the Constitution was participatory - thus the drafting of the 2014 Constitution took much longer and involved far more people.

A campaign without a public debate

There was no national consultation put in place, with the exception of the electronic consultation 'e-istichira', at a time when the text was not even officially being drafted. Launched online between January and March 2022, the e-istichara's role was to gauge the population's expectations of the future Constitution. However, the results reveal that a very small part of the population participated in this survey: with only an estimated 500,000 registered voters, 7.5% of Tunisians who are of voting age participated.

At the time, the Constituent Assembly organised several national consultations, and involved civil society in particular. According to Badreddine Abdelkefi, a member of the National Constituent Assembly and in charge of relations with civil society, more than 300 representatives of civil society participated, whether through workshops, meetings or reviewing certain parts of the draft Constitution. This time however, with the exception of the organisations present in the national dialogue commissions, there were no plans to involve other associations in the process 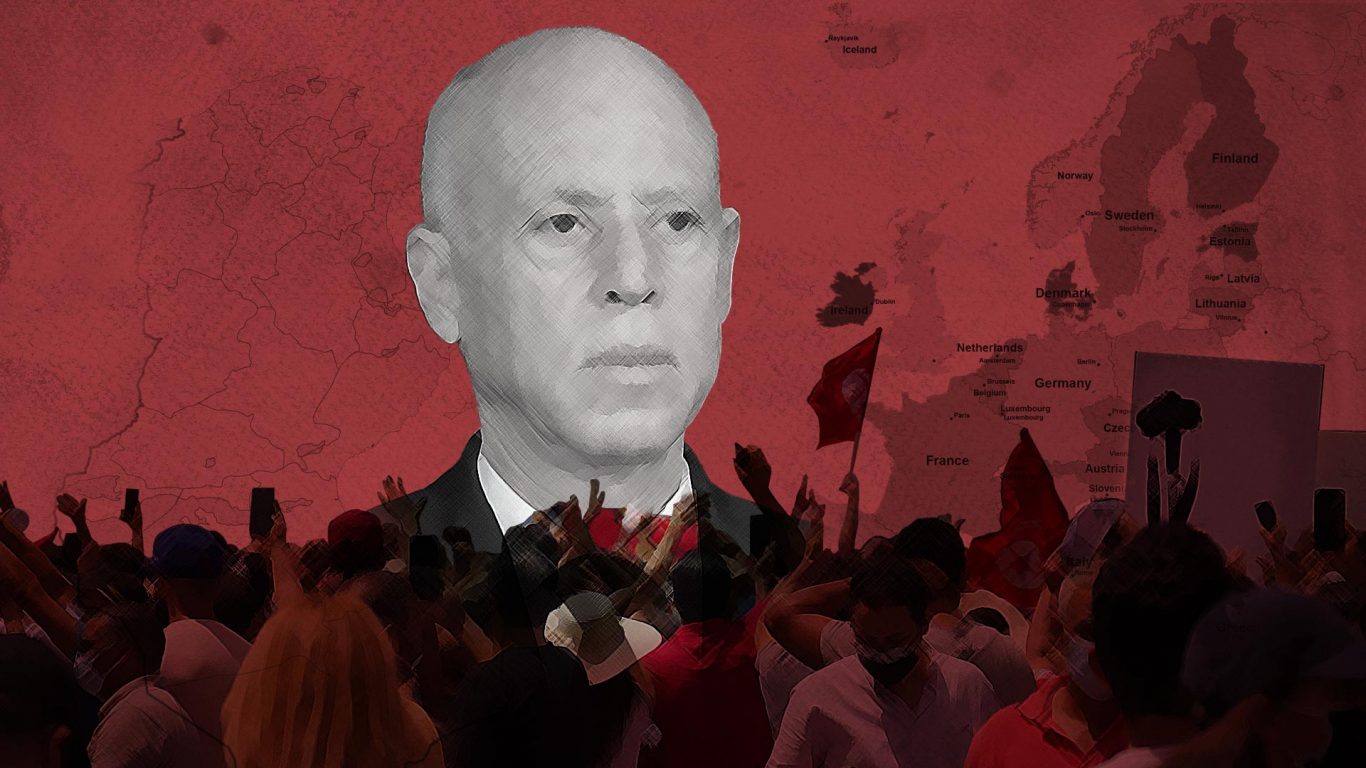 “Civil Society”, in the crosshairs of Kaïs Saïed

Since June 21, the necessary documents for any organisation wishing to register to campaign for or against the referendum have been available via the ISIE. This registration closes less than a week later, even before the text is released on June 30. The campaign is then scheduled to start on July 3 and will last less than a month: participants in the campaign will have just three days to get acquainted with the text before taking a stand. 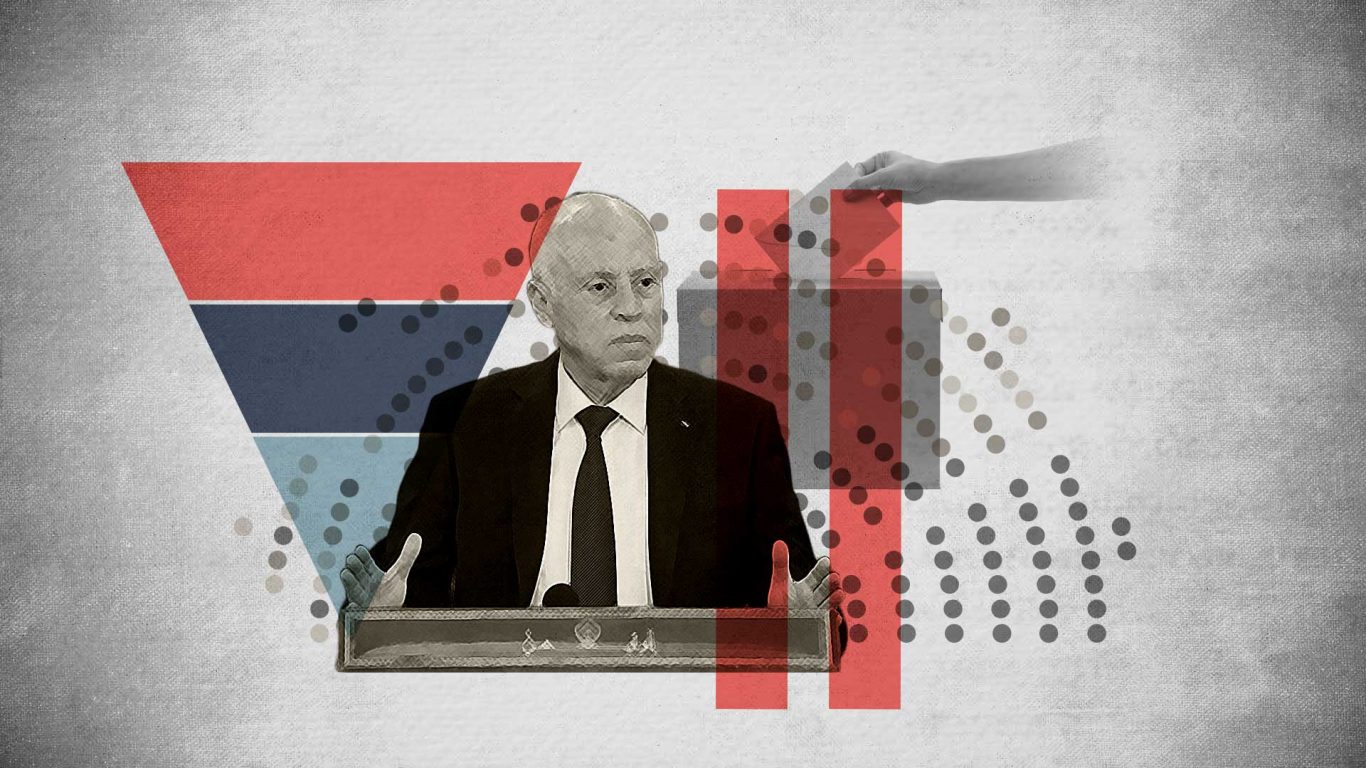 Building a democratic structure from the ground up: what is Kaïs Saïed's state plan?

For those who would like to call for a boycott of the referendum, the ISIE is struggling to give a clear stance. In a social media post on June 13, Sami Ben Slama, a member of the ISIE, said that those boycotting the referendum would be included in the campaign. The following day, Maher Jedidi, vice-president of the ISIE, stated the opposite on national radio.

He even further stated that "if people calling for a boycott were to do something that was reprehensible under public law, the law in question would be applied".

He retracted this statement the next day, saying that his words had been manipulated.

About 7 million Tunisians are registered to vote, and 2.4 million new voters are expected to participate in the referendum. The ISIE organised a voluntary registration campaign between May 29 and June 14. " It took 17 days", said Raja Jabri, president of the national electoral observation network 'Mourakiboun'.

For the latter, the ISIE's deadlines are untenable. "We have been calling for the ISIE to open the registration since February! Why the wait? (...) We would normally start six months before, but now we don't even have two months, it's very short", she insists. She also recalls that the referendum had been known "since Kaïs Saied's speech in December [2021]" even though it was only made official on May 25 via presidential decree.

To access the registration platform, "agents need to have a computer, a tablet", explains Raja Jabri. "When I give my CIN to an agent, they can find out if I have a conviction that stops me from registering, for example, or if I am a citizen who has the right to do so. Most only have a notebook, they register you, ask you where you want to vote and give you a receipt without so much as an ISIE stamp, which wasn't provided either."

"According to our report, 85% of the registrations were done manually", says the president of Mourakiboun.

However, this system multiplies the likelihood of errors: out of the 17,000 manual registrations in 2014, only 6,000 were valid, again according to Raja Jabri. "Either they get the number wrong, or the identity card number, etc.".

In contrast to previous elections, Mourakiboun also notes a lack of electoral strategy: for example, there is no registration campaign among target populations. "The registration statistics are not even published", she comments.

In theory, these problems should have been solved by the introduction of the automatic registration system on June 15. Citizens were registered on the basis of the address on their identity card. "It is an address that no one changes", says Raja Jabri, "running the risk of being registered far from one's place of residence".

For the president of Mourakiboun, automatic registration "is not bad in absolute terms". "But at the same time, it implies that a campaign should be carried out to raise awareness amongst citizens" so that they know exactly which office they are supposed to go to.

"What we are afraid of is that names will be added manually to the electoral register on the day of the vote", fears Raja Jabri. "This is very serious, and already happened in 2011."

On July 25, the role of election observers will be crucial. However, on May 12, 2022, Kaïs Saied stated that he was opposed to the presence of foreign observers. "I think this was said without any real basis. We have had assurances that there will be no change this year and that those who apply for accreditation will get it", says Raja Jabri.

However, given the tight deadlines, several observer networks have already announced that it will be difficult, if not impossible, for them to travel to Tunisia for July 25. Raja sums up: "it is not a smooth atmosphere, with fixed dates and the ISIE managing to do its job properly".

A referendum, and then?

Beyond the risks surrounding July 25, very little information has been communicated about what will happen next. Nothing has been said about the timeframe for any implementation or about the repeal of the 2014 Constitution if the new text is accepted.

"The big question is: what happens after the 25th?" Raja Jabri asks herself. "If the yes side wins and the Constitution is legally published, will it be legitimate and accepted even if there is a very low turnout?"

"There is the proportion of yes and the percentage of participation. One is about acceptance, the other is about legitimacy."

So far, Kaïs Saied has not provided any information on what will happen if the "no" vote wins. "If the no wins, do we enter into another crisis, or a second referendum? Usually countries make this clear, providing all the scenarios", comments Raja Jabri.

"It's as if the yes side is going to win at all costs."

There are many other grey areas, especially regarding the early parliamentary elections. "I am not at all optimistic about the period after July 25", says Raja Jabri. "We will have to think about the legislative elections: how will they take place, with what constitution, what electoral law? It will be a lot of work and I see many crises looming."

This article was written respecting gender-sensitive grammar.
When contacted by inkyfada, the ISIE was unable to respond immediately to our request for an interview. Should there be a reply at a later date, this article will be updated.

Illustrations
inkyfada.com is a project of the association Al Khatt