How can military courts judge civilians?

Yassine Ayari, Seifeddine Makhlouf, Nidhal Saoudi: in recent months, these three MPs (whose work is currently suspended) have faced military justice. Why were these men referred to the military courts? Between constitutional loopholes and an aborted bill, inkyfada sought to find out how and why the Tunisian military courts are still able to judge and convict civilians.
Written by
Noujoud RejbiQuentin Peschard
| 28 September 2021 |

On that day, a woman was prevented from leaving Tunisia because of her S17 file. She appealed to members of the Al Karama party. As they went there to understand the situation, an altercation broke out with the border police, and the latter authority filed a complaint against them. 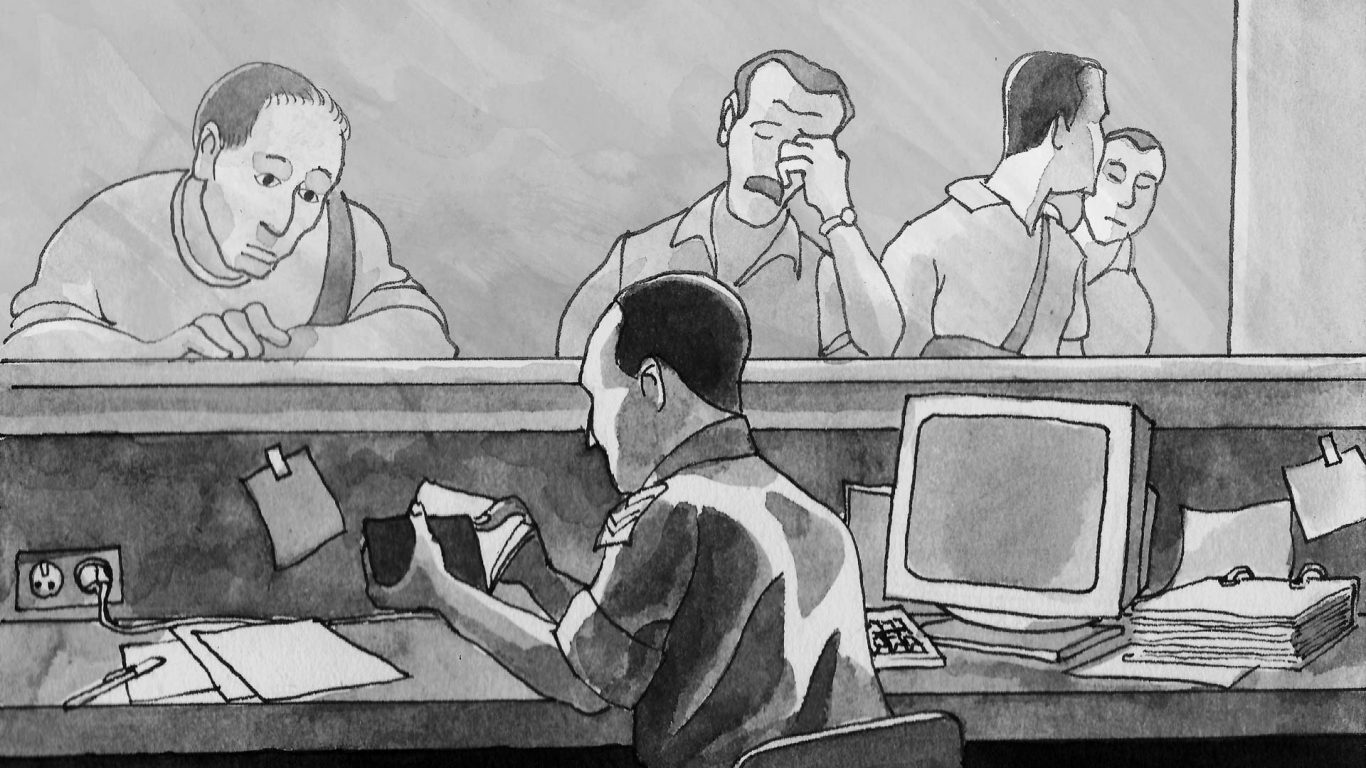 The same situation applies to Yassine Ayari, a member of parliament belonging to the political party "Espoir et Travail". On July 30, 2021, he was violently arrested at his home and imprisoned in the Mornaguia prison. When contacted by inkyfada, his wife, Cyrine Fitouri, denounced the violent manner in which the arrest was carried out.

"It was like arresting a terrorist. They showed no papers, they refused to say who they were. There were about 15 cars and 30 people, with nothing written on the vehicles", she says.

According to Cyrine Fitouri, they did not even give her husband time to grab his things. "It looked like a kidnapping".

Yassine Ayari was arrested because of a sentence handed down more than three years earlier by a military court. On June 26, 2018, the MP had been sentenced to two months in prison. The court had accused him of "defaming the army" on his personal Facebook page. As he was protected by parliamentary immunity at the time, he did not serve his sentence. This would be the third time that the MP has been sentenced by a military court, having already been sentenced in both 2018 and 2014.

According to a statement from Amnesty International, "at least 10 civilians have been tried in military courts in cases related to expression of opinion, usually for criticising the military or state officials" between 2011 and March 2020.

Amnesty International issued an "urgent action" on September 14, 2021 calling for "the immediate release of Yassine Ayari" and denouncing his conditions of imprisonment. He was finally released from prison on September 22. This respite was short-lived, as he is now under a new investigation opened once again by the military prosecutor's office, following Facebook posts that had been published on July 25, 26, 27 and 28, 2021. These posts were mainly aimed at the President of the Republic and his seizing of power, which he had described as a "military coup d'état planned and coordinated from abroad", according to Amnesty International.

"Trying civilians before a military court is a tradition that has always existed in Tunisia. Whenever successive governments considered a word to be an attack on State or national security, they called on the military justice system. This same mechanism is still used today", explains Nesrine Mbarka Hassen, Acting Director of the Tunisian office of Amnesty International.

A number of laws allow military courts to try civilians

Behind this practice are several legal texts that allow military courts to try certain cases involving civilians. Article 8 of the military justice code specifies that military courts are qualified to judge civilians "as perpetrators [...] or co-perpetrators" of the offences for which the code provides. These include public insults to "'the flag or the army', violating [their] dignity, [their] reputation, [their] morale", "acts likely to weaken [...] military discipline, obedience and respect due to superiors", as well as "criticism of the actions [...] of army officials which undermines their dignity", all of which are punishable under Article 91 of the same code.

In the case of Yassine Ayari, the military court proceedings are conducted on the basis of this same article.

"When you criticise the military apparatus, you are not forgiven: it is freedom of expression that is condemned under this article", comments Elyes Ben Sedrine, lawyer and transitional justice specialist for Lawyers Without Borders (ASF).

Salsabil Klibi, an assistant at the Faculty of Legal, Political and Social Sciences in Tunis and a specialist in constitutional law, deplores the archaic nature of this legal arsenal: "We are dragging this anomaly along because our texts have not been updated", she believes.

For example, Article 91 has never been amended since its introduction in 1957, just like many other parts of the military justice code. Even though it has undergone some adjustments since then, the articles relating to civilians have never been amended in such a way as to prevent them from being tried by military courts.

According to Salsabil Klibi, this predicament is mainly a legacy of the Ben Ali dictatorship. "The context is that of a new state that was perceived as fragile and that we wanted to protect from any potential threat", explains the constitutional expert. "Ben Ali could have revised this text but he did not because it was a way of intimidating his opponents."

The military justice code is not the only one to involve civilians. According to Article 22 of Law 70 from August 6, 1982, offences involving agents of the Internal Security Forces "while executing their duties" which "relate to their responsibilities in the areas of internal or external security of the State or the maintaining of order", are to be judged "before the competent military courts". In the case of lawyer Mehdi Zagroubi and the six Al Karama MPs involved in the airport affair, it was the assault of border police officers on duty that led to them being brought before military justice.

While the trials of civilians before military courts have a real legal basis, they are in violation of several rights and freedoms guaranteed by the Constitution.

The 2014 Constitution is supposed to protect civilians from such trials. Article 108 guarantees that "all persons are equal before the law" and access to "a fair trial" for everyone. These two clauses do not seem compatible with how the military justice system currently operates, where members of the army can be found both in the ranks of the victims or the accused, as well as in those of the magistrates.

Article 31 of the Constitution establishes "freedom of opinion, thought, expression, information and publication", without "prior checking". The contradiction of this with Article 91 of the military justice code is glaring, as shown in the case of the Ayari affair, where it sanctions criticism of the army or its generals. However, these articles are all "subject to the Constitution, since they are laws. The latter are inferior in the hierarchy of norms", Salsabil Klibi points out.

Article 149 of the same Constitution states that "the military courts shall continue to exercise the powers vested in them by the laws in force until they are amended". It therefore gives MPs the responsibility of putting a law in place that specifies the prerogatives of these same courts.

However, the constitutional project to reform the military justice system was never implemented. The Tunisian justice system therefore continues to use obsolete texts to bring civilians before military courts, seven years after the promulgation of the Constitution. This state of affairs is "inconceivable in a democracy" and constitutes a "violation of the rule of law", according to Salsabil Klibi.

A failed and incomplete attempt at reform

This discrepancy between the 2014 constitutional text and how the military justice system operates has not escaped the attention of some members of the Assembly of People's Representatives (ARP), which has been suspended since July 25, 2021, who have tried to put its reorganisation on the parliamentary agenda.

In November 2018, MPs from the Democratic bloc tabled a bill whose aim was to clearly define the prerogatives of military courts (which had thus far remained unclear) and to exempt civilians from their jurisdiction. The bill considers them to be competent only to judge military offences exclusively involving members of the army. The MPs therefore seek to delete Article 22 of Law 70 from August 6, 1982, which allows civilians to be brought before military courts for offences involving members of the internal security force in certain situations defined by the same law.

Since July 25, 2021, all activities of the Assembly have been suspended by presidential decree. On September 22, a new announcement indicated that future decree-laws would modify the organisation of the justice system and the judiciary, although it was not clear whether an end to the trial of civilians by military courts would finally be on the agenda.

As a journalist, I like covering politics, the environment and historical issues.