For several weeks now, the spread of the virus has been rapidly accelerating throughout Tunisia, which is now ranked as one of the countries suffering the heaviest losses during this period. The following five graphs help analyse the current situation, as well as the potential for a fifth wave in the autumn.
Written by
Malek KhadhraouiMonia Ben Hamadi
| 02 August 2021 | 10 minutes | Available in ArabicFrench
Dataviz

Number of infections and recoveries, death toll, number of intensive care beds available... One year after the beginning of the epidemic, where does Tunisia stand with regard to Covid-19? inkyfada has gathered a large amount of data on the health situation in the country. Using interactive maps and graphic charts, discover all the key figures of the evolution of the epidemic. Article updated regularly.
Dataviz

After nearly a month's delay, the vaccination campaign against Covid-19 in Tunisia finally began on March 13. The number of people vaccinated, the number of vaccine doses announced and received - will the government's objectives be met? View the regularly updated progress and projections of the campaign, in numbers.
Featured stories

“I can’t afford to pay!” cries out Fadhila as she discovers her husband’s medical bill. Having caught Covid-19, he spent two weeks in an intensive care unit in a private clinic in Greater Tunis. The clinic in question is now billing him more than 20,000 dinars in expenses. Overcharging, lack of transparency and harassment - Inkyfada has gathered the testimonies of several families and healthcare professionals.

This graph shows the status of Tunisia as compared to other countries (categorised as World, Arab World and Africa) in terms of the number of deaths per million inhabitants over the last 7 days of July, as well as the total number of deaths over the same period. Sources: Worldometers and the Tunisian Ministry of Health.

In proportion to its population, Tunisia ranks as the second country in the world in terms of number of deaths during the last seven days of July, just after the British Virgin Islands. Within Africa, Tunisia ranks first in this respect, and is considerably worse off than all other Arab countries, recording 105 deaths per million inhabitants, compared to 25 in Libya and 18 in Oman, which rank second and third respectively. 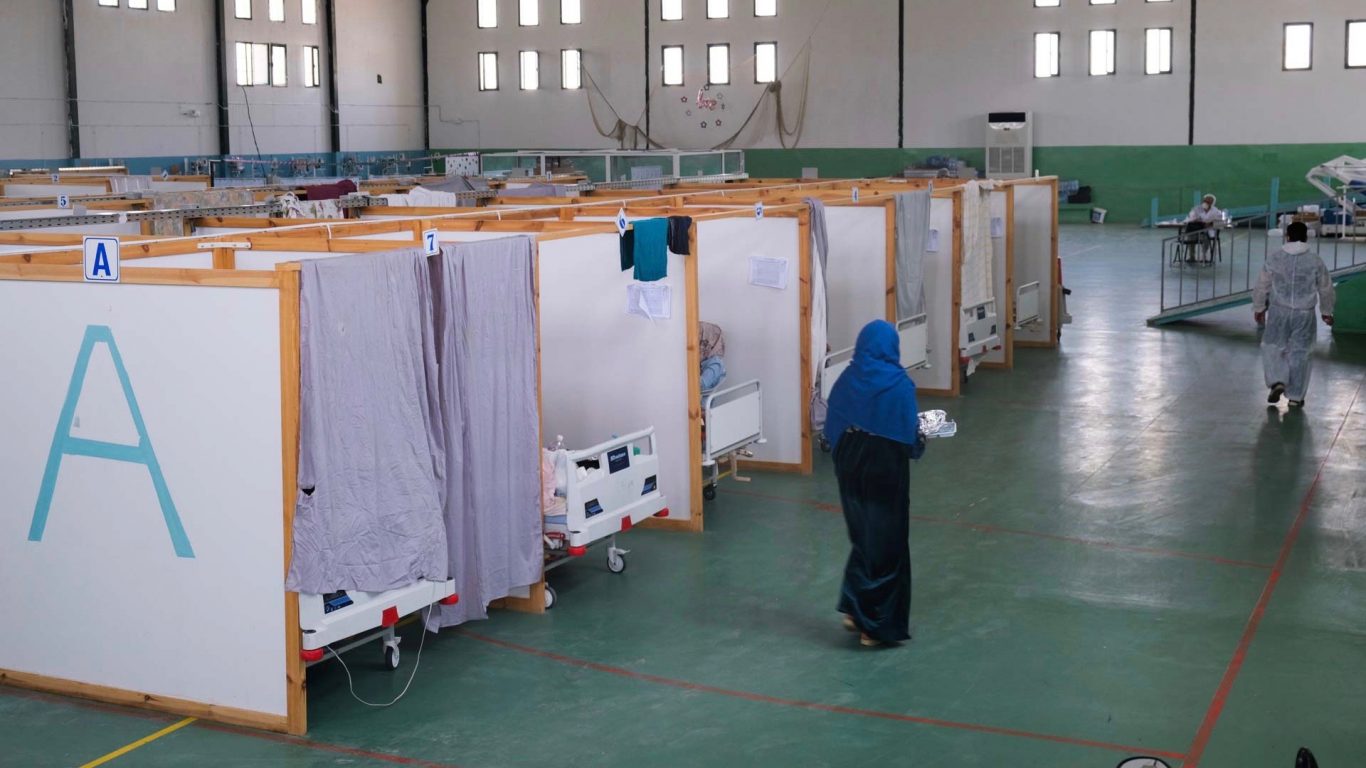 Covid-19: "Take Our Picture, We Are Dying Here", The Cry of Distress from the Residents of Kairouan

This graph shows the status of Tunisia as compared to other countries (categorised as World, Arab World and Africa) in terms of the number of tests carried out since the beginning of the pandemic, in proportion to the number of inhabitants. Sources: Worldometers and the Tunisian Ministry of Health.

Tunisia's limited screening policy may have several negative effects on the number of reported deaths, but also on the actual number of Covid-19-related deaths.

Unlike countries such as Australia, where early detection is used to take preventive measures against an uncontrollable spread of the virus (more than 25 million tests for nearly 34,000 reported cases and less than 1,000 deaths), Tunisia has not managed to control the pandemic after the reopening of its borders at the end of June 2020, and on average, more than a quarter of the tests turn out to be positive. Only 2.3 million tests have been carried out for nearly 600,000 detected cases.

The massive screening policy recommended by the World Health Organisation, among others, is still not on the Tunisian agenda. This measure is supposed to detect positive cases, including asymptomatic ones, to be able to isolate them and trace contact cases to limit contamination and prevent potentially serious cases. By allowing such a spread to take place, Tunisia has now seen a very rapid increase in the number of deaths for several months.

The limited screenings may also have an impact on the discrepancy between the number of deaths reported and the number of actual deaths in a given country. The less screening that is conducted, the more likely it is that Covid-19-related deaths are not recorded as such.

Speaking about this matter, Fayçal Ben Salah, the Director General of Health, told TAP that 4,000 deaths related to Covid-19 had not yet been counted as of July 15.

He also indicated that an estimated 4.5 million Tunisians had already been infected, without giving further details on how these figures were compiled and consolidated.

In an interview with Mosaïque FM at the beginning of July, Nissaf Ben Alaya, spokesperson for the Ministry of Health, stated that the high number of deaths could also be attributed to the "collapsing" hospital system.

In the same vein, Fawzi Mehdi, former Minister of Health, stated after his dismissal that the hospitals had a total of 540 intensive care beds on July 20, while 681 people in need of these services were hospitalised on the same day. The Ministry of Health has since stopped providing these figures. Before being dismissed, the Minister was also criticised for the management of the available oxygen stock, as health care employees in several hospitals had warned of the impending risk of shortages that could endanger the lives of patients.

Moreover, as of July 16 (the date of the previous update), official figures indicate that just over 21,000 patients have been treated since the beginning of the pandemic, even though a total death toll of over 17,000 was recorded on the same day.

These figures may be indicative of either ineffective care for severe cases requiring hospitalisation, or a lack of hospitalisation or access to care for a relatively high number of people who died from Covid-19. In either case, the Tunisian health system has exposed its limitations.

THE PEAK IS BEHIND US... BUT SHOULD WE EXPECT A NEW WAVE IN THE AUTUMN?

Based on the weekly average number of detected cases, the peak for this deadly summer wave was recorded on July 12. The peak in the number of deaths occurred more than two weeks later, at the end of July (still based on a weekly average).

Since then, the Presidency of the Republic has announced the alleviation of certain measures (for example a curfew at 10pm instead of 8pm, cafés and restaurants allowed to operate until 7pm, etc.). However, according to the data collected over the past year, and an analysis of the curve of Covid-19-related deaths, the decrease could be momentary, and we could expect to see a fifth wave in the autumn...

The predictive model presented in this graph was calculated by using the open source tool "Facebook Prophet", which allows the prediction of temporal data based on an "additive model". The breakdown of the data in this series (here the evolution of the curve recording deaths over the last year) allows us to predict (in the absence of new variables that could reverse the trend) the course of this curve for the upcoming months, according to high, medium and low projections.

Even if the summer peak is behind us, this might not last very long. Analysis of the evolution of the curve charting Covid-19-related deaths for nearly a year now (using a predictive model based on these temporal data), makes it possible to project the shape of this curve for the months to come. According to this model, the number of expected deaths per day would decrease only slightly in August, before increasing again from September onwards. At least 200 deaths per day, according to a low projection, could thus be expected between October and November 2021.

With a comprehensive screening policy and a health care system that is able to care for the sick in addition to restrictive measures, several countries have managed to curb the number of deaths through a relatively effective vaccination campaign.

For example, since the beginning of June, the UK has seen a dramatic increase in infections, following the exponential spread of the Delta variant (a highly contagious variant that was first detected in India). The number of recorded cases had risen from around 3,000 to over 50,000 by mid-July. However, with more than half of the population fully vaccinated, the number of deaths did not follow a similar trend (a peak of 131 deaths was recorded in late July).

In Tunisia, less than 10% of the population is fully vaccinated. In the absence of a significant acceleration in vaccination rates, or drastic measures to contain the spread of the virus (with increasingly contagious variants), the country is unable to avoid a fifth wave.