On the night of June 20-21, just before midnight, police officers dismantled the camps of the El Kamour demonstrators in the Tataouine region, leading to scenes of violence between the police and the protesters. For three years, El Kamour has been in a deadlock.

Between June 24 and July 6, Amnesty International collected 16 testimonies from witnesses or victims of police violence during the El Kamour protests. The ensuing report highlights the excessive use of violence by law enforcement officials against peaceful demonstrators. On the basis of these testimonies, Inkyfada looks back at the situation in the El Kamour region, where anger has been growing for many years.

Like Noureddine Darza, ten other demonstrators, including the spokesperson of the Tarek Haddad movement, spend the night at the police station without any of their fundamental rights being respected; most of them claim to have been abused and insulted during their arrest, even though the sit-in was peaceful. Similar to the situation in 2017, the protesters are fighting with the authorities to claim their rights. They demonstrated, organized sit-ins and blocked roads to the oil pipeline valve, demanding more jobs and social justice.

That evening, Noureddine Darza had prepared dinner for the demonstrators in the tents. " We'd finished eating and I was about to go home. And all of a sudden we heard police cars and tear gas," he told Amnesty International.

Other witnesses confirm his story. As soon as they reached the first tent, the police started firing tear gas. Everyone around Noureddine Darza ran away and many were chased and beaten with batons.

Noureddine surrenders to the police with his hands up in the air, without showing any sign of resistance. But that doesn't stop the police from driving at full speed in his direction with one of their vehicles, hitting him and breaking his leg. He was then surrounded by seven masked policemen who kicked and beat him with their guns.

A policeman slaps him and drags him several metres to the van where four other demonstrators are already present. Inside the vehicle, their mobile phones and wallets are confiscated and the beatings and insults continue.

The group is taken to the Tataouine police station, where they spend the night in an empty office without seats or beds. " I had pain everywhere. I was bleeding and I felt that my leg was broken. I told them I was an old man, that I had children, that I was peaceful, but they didn't care," says Darza.

" One of them told me he'd step on my leg to make sure it was broken, if I didn't stop asking to go to the hospital."

Around 5am, after several hours without any care, the police finally agreed to take them to the hospital, on one condition: Noureddine Darza had to sign, under duress, a document stating that he would no longer take part in the demonstrations. Two other demonstrators testify to having been subjected to the same pressure.

A total of six people interviewed by Amnesty International claimed to have been " insulted, dragged to the ground, beaten with truncheons or gun butts and beaten with boots when arrested," even though they showed no sign of resistance. According to the protest organizers, 11 demonstrators were arrested that night and detained for several hours.

During this night of violence and arrests, the 13 tents belonging to the El Kamour sit-in were destroyed and the camp was dismantled. The camp had been set up on June 8, 2020 following almost a month of demonstrations. The aim was to block access to the valves and pumps of the El Kamour oil field, echoing the events of 2017.

At that time, the protesters were already calling for more employment and development, especially in the oil sector, a precious resource in the region. For several months, the inhabitants of the region developed and deployed innovative methods of protest. 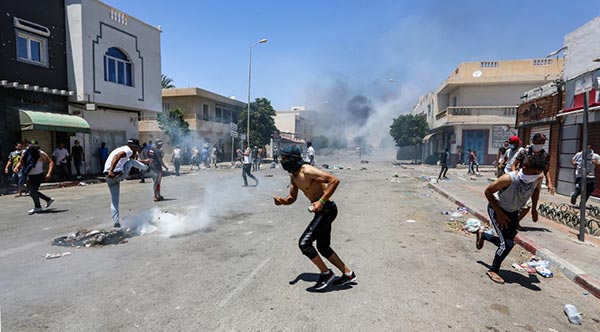 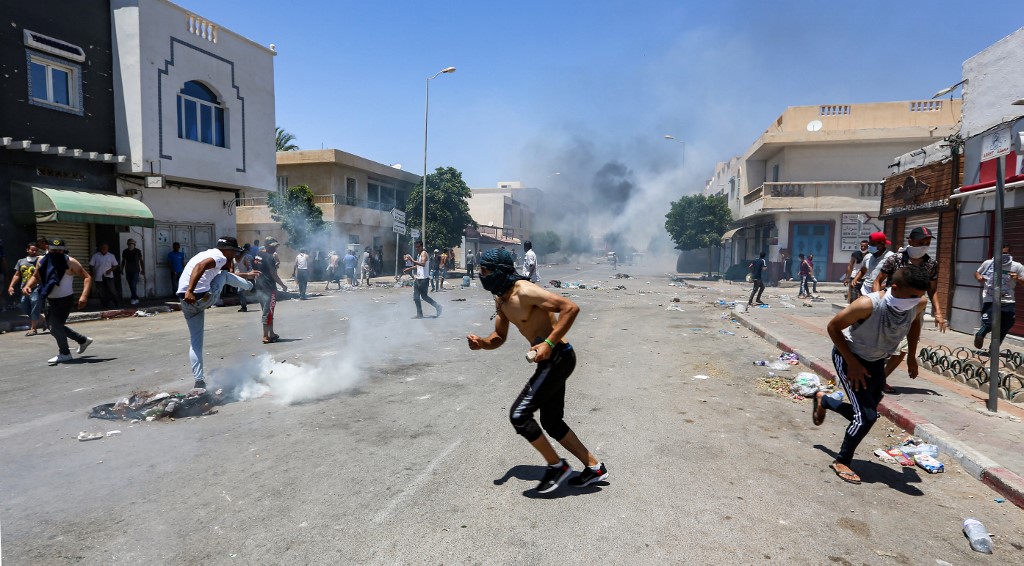 The following morning, several protesters gathered to demand the release of the arrested demonstrators and to denounce the police violence. Ten of the detainees were released during the day, with the exception of Tarek Haddad, the movement's spokesperson, who was not released until three days later.

In an attempt to justify the raid on the sit-in, the Interior Ministry claimed that the aim of the intervention was to arrest Tarek Haddad, who "was the subject of several arrest warrants." However, in response to this claim, Amnesty International said in its report: "This does not justify the excessive use of force during the raid."

Haddad calls his arrest "the worst night of [his] life." As he fled, he could hear the police shouting "Catch that one!" or "Hit him on the head." It was impossible to communicate with the police, he says.

"They grabbed me by the belt and began insulting me very violently, insulting my mother and father. They called me 'dirty dog' and worse. Their words still echo in my head."

A demonstration was held in front of the Tataouine court of first instance to demand the release of the spokesman. Violent clashes broke out and paralysed the town for three days. The police used tear gas extensively, even in residential areas.

"I left my house at around 11am. In the main street, I saw tear gas everywhere," said Abderrahman Al-Gasser, a well-known political activist in the region. He then tried to go to the police in an attempt to calm the situation down. Two people testify to seeing him move calmly and in the open towards the police.

"As soon as I greeted them, about a dozen of them attacked me with truncheons. I fell to the ground and they continued hitting me and kicking me with their boots. It was a savage beating. [...] One of them placed his boot on the back of my neck. They hit me on the head and took me to the police station in Tataouine."

Abderrahman Al-Gasser spent two days in hospital. He had suffered from a broken leg and injuries to his arms, and received several stitches on his head and face.

Awatef Degnish, a member of Amnesty International Tunisia and a resident of Tataouine, describes the city as shrouded in a fog for three days. Tear gas sometimes landed directly in houses. "I have never experienced anything like this. It kept coming down on the town. People at home were forced to call for help because they were suffocating," she says.

According to the Ministry of Interior, the demonstrators used Molotov cocktails against the region's security institutions. Neither Inkyfada nor Amnesty International have been able to find any testimonies, videos or photos to support these allegations. The demonstrators reportedly threw stones at the security forces and burnt tires on the roads. 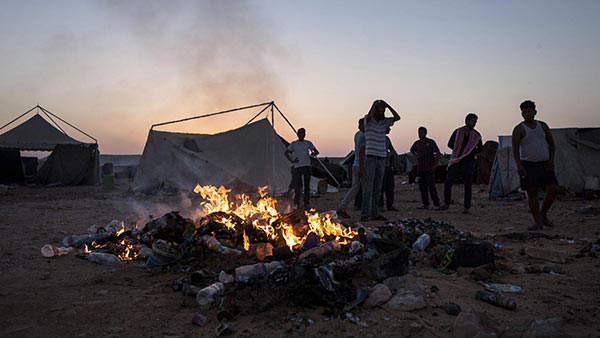 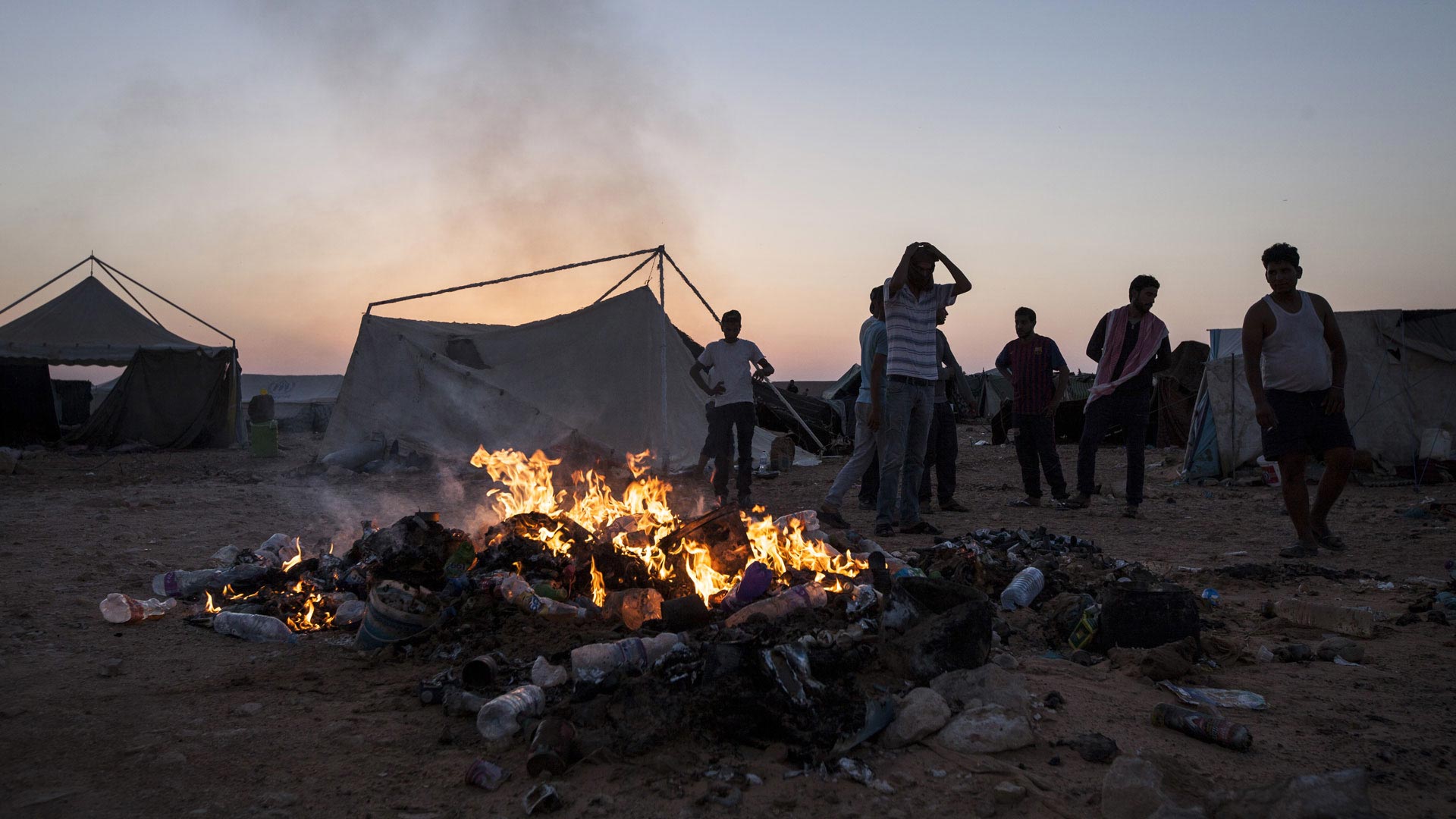 In 2017, protesters created a fire at the camp. For three months, protesters observed a sit-in to put sustained pressure on the government. Photo credit: Malek Khadhraoui / Inkyfada

The demands of the protesters, as well as the allegations of police brutality made by many witnesses, seem to be consistent across the events that have been taking place in the region in recent years. Several protest actions, including general strikes, demonstrations and sit-ins,  have occurred simultaneously to demand more employment, development, and a better distribution of wealth.

In May 2017, confrontations between the demonstrators and the security forces reached a climax with the death of Anwar Sokrafi. On that day, the National Guard surrounded the El Kamour camp and the 23-year-old was hit by a car. He died on the spot.

The spokesperson for the National Guard later claimed that it was an accident. Yet, this statement is inconsistent with the video footage of the demonstrators. Hundreds of people attended his funeral and the clashes became increasingly violent. To this day, the Sokrafi family is awaiting justice. The family's lawyer, Mohamed Chalghoum, has been contacted several times and has refused to comment on the case.

Almost a month later, on June 16, 2017, an agreement was finally reached between the government and the demonstrators. It was symbolically signed by Anwar Sokrafi's father. The authorities then committed themselves to creating 3000 jobs in ecological companies between 2017 and 2019. In addition, they promised 1500 jobs in oil companies before the end of 2017. A budget of 80 million dinars was also said to be allocated for the development of the region.

Three years later, despite repeated promises by the government, MPs and the governor of Tataouine to prioritize El Kamour, many of the measures in the agreement are yet to be implemented. Between 2017 and 2019, sporadic demonstrations continued. However, in the absence of any change in the situation, the movement hardened and the sit-in resumed on July 17.

This article is based on Amnesty International's report "Tunisia: Authorities must investigate excessive use of force in Tataouine," published on July 21, 2020 and available here: https://www.amnesty.org/download/Documents/MDE3027472020ENGLISH.pdf