Hamrouni and Aziz: Two Sides of Sex Work in Tunisia

Hamrouni* and Aziz* practice the same profession, without having the same rights. She works legally, while his work is clandestine. From their police interactions to the dirty looks from local residents, their daily lives look nothing alike.
Written by
Hortense Lac
| 23 February 2018 |

Originally from Greater Tunis, Hamrouni is a single mother with three children who previously sold lighters in the street to support her family. Almost nine years ago, she learned that one of her daughters, an injecting drug user, had contracted HIV.

Between medication and health care, Hamrouni became unable to meet her family's expenses through selling lighters. Without knowing anyone there, the idea came to her to knock on the door of Abdallah Guech and to pursue sex work to " earn more money."

So Hamrouni went to the municipality of Tunis. " There's a vice squad specializing in women who wish to be sex workers," says Hamrouni. It was there that she confirmed her decision, stating that she was not involved in a relationship; a necessary condition to get a job in Abdallah Guech.

‘‘If she (a woman) wants to get married, she applies to the Vice Police and stops working."

As soon as she arrived, the manageress of her apartment lent her 2,000 dinars, " to encourage her." Nine years later, Hamrouni continues to repay this debt by a few dozen dinars every month.

Unlike Hamrouni, Aziz turned to sex work by chance. At around 13-14 years old, his path crossed that of a man, a foreigner. " I think it was in the street, or on the beach," Aziz recalls. More than ten years have passed since the encounter, and some details have faded with time. He remembers that this man had asked him to come and " play doctor." The teenager agreed to go with him, having failed to grasp the implication. " I didn't look for anything at first," says Aziz.

Shortly afterward, the young man started to get paid for sexual favors. " When you go down that road, you trivialize these things.’’ You say to yourself, 'It's only an ass, it's only a body, it's only a mouth...'" he justifies.

He quickly became dependent on the money and gifts that were given to him by his partners. His outings multiplied, and he started spending without tracking his expenses. " It was a way to get... for example... a trendy Walkman... It may seem trivial, but in the eyes of someone who hasn't even turned 18, it's something," he explains calmly. 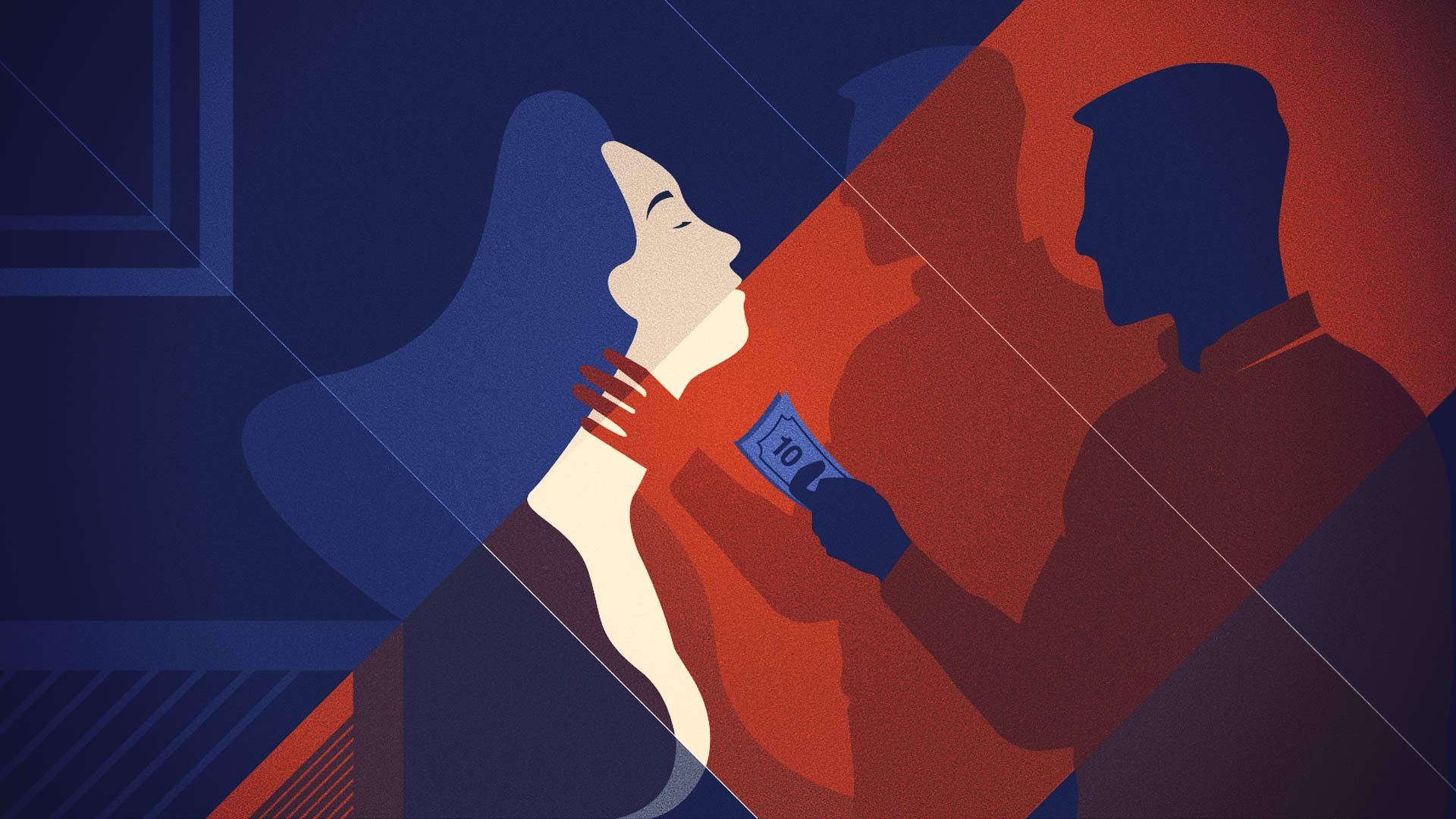 In Abdallah Guech, Hamrouni shares a small apartment with several other colleagues.. The whole impasse is organized in this way, with each manageress running a few rooms in the apartments. The price of a sessions is fixed: " 8 dinars 500 [millimes]," says the young woman. This sum is then divided between the manageress and the sex worker. With each session, the sex worker earns 3 dinars, which is often supplemented by small change left by the clients.

Decree on the regulation of prostitution in the regency

As for their rights, workers in brothels such as Abdallah Guech never work on Fridays; on this day, the impasse closes. A doctor visits them twice a week to examine them. He also gives them time off work during their menstrual periods.

In the evenings, once the doors of the impasse are closed, most of them continue to practice their profession illegally. At that point, they no longer abide by any rules and set their prices according to the clients and their requests.

As he is not practicing within a legal framework, Aziz has never had access to these benefits. At the time when he was regularly doing sex work, he set the price of his sessions at between 200 and 300 dinars. His clients, mostly foreigners, could spend hundreds of dinars for little time with him, sometimes even just for dinner. " It was more like escorting, more for the company." The young man never talked about money with his clients.

" You don't have to show them that that's what you're there for, that they're paying for a service," he says, " I prefer it to be more spontaneous on their part."

But for the past few years, he has hardly been practicing his trade, " it became boring," he justifies. " I was afraid it would consume me. The excitement diminished, maybe with age, the need changed."

Financially, he found other ways to earn a living while studying; now, he spends a lot of time selling accessories on the internet. This side project had allowed him to continually justify his income from his parents when he was a teenager. He believes that his family suspects nothing except his mother, who has never been fooled by any of his activities. 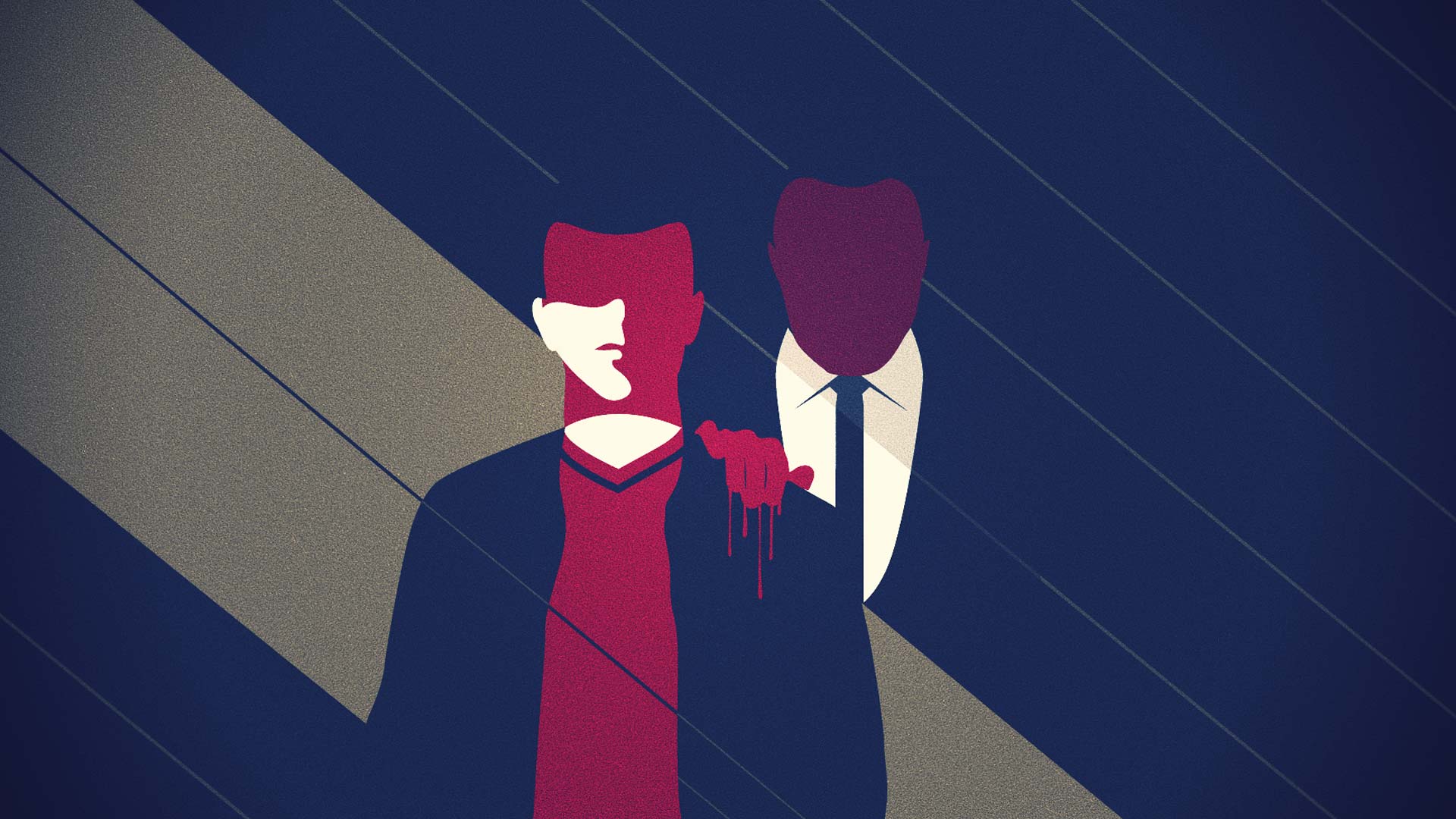 Once the doors of the Abdallah Guech impasse have been crossed, the client finds himself faced with several women and chooses the one with whom he wishes to have a sexual relation . The prostitute gets to have the last word and may refuse if the man does not inspire confidence or appears to be showing signs of infection. " Ah, the women who work in brothels, before having sex, they see if there are any problems," Hamrouni laughs.

Over time, some clients become regulars. Sometimes they call Hamrouni before coming, so she can take a shower and get ready. But often they are just passing through town. Through talking with them, Hamrouni learns that most of them come to Tunis for professional reasons and, once business is done, " they go to a brothel."

For a clandestine sex worker, the relationship with the clients is different. While newcomers only seek out Aziz for sex, long-term regulars also pay for escort services.

" The best-known corners are the tourist corners," the young man describes, " there are even hotter corners, in the evening, for example, the Love Garden, the Garden of the Passage, the Belvedere." But in these places, the risks increase with the presence of police officers or local residents. 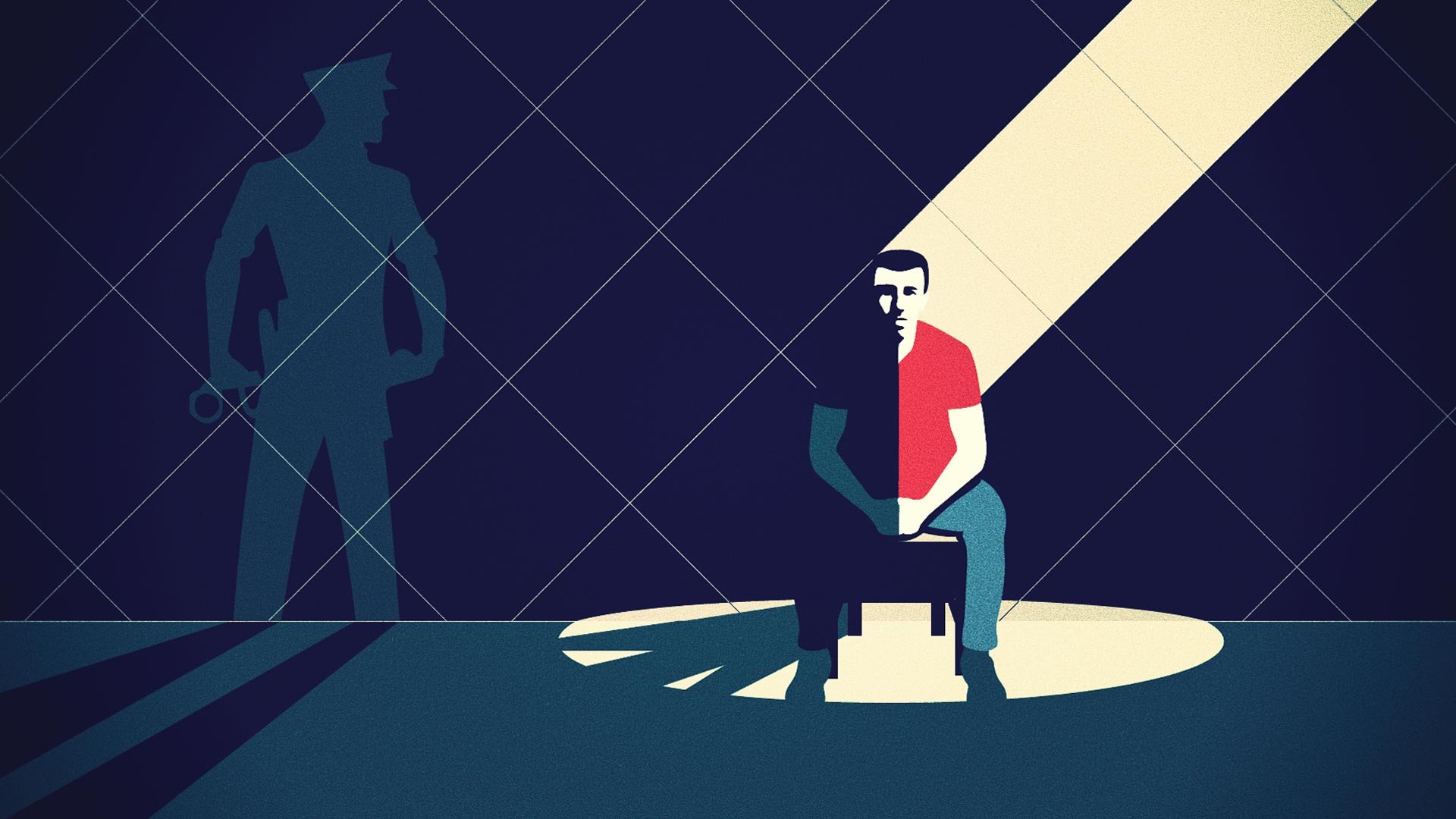 The impasse of Abdallah Guech is known to law enforcement. They even protected the brothel from attempts to shut it down after the revolution. Since then, a door closes in front of the impasse every night to prevent anyone from entering. On top of that, several people from the neighborhood help the sex workers in their daily lives and keep an eye on the comings and goings of passers-by. In the event of any issues, the police are never far away.

From a health point of view, the sex workers in the brothel are visited by a doctor twice a week for check-ups. The doctor gives them a few condoms, stressing their importance in avoiding infections, diseases, and unwanted pregnancies. However, Hamrouni regularly has to dip into her income to buy more condoms. Faced with the insistence of some clients and the prospect of extra dinars, she sometimes has unprotected sex.

Aziz, on the other hand, never used a condom, " It was exciting. You were taking a risk..." At the age of 23, he went to an office of the Tunisian Association for the Fight against STDs and AIDS (ATL MST SIDA) to get tested. He was amazed that he had not contracted the virus. " I couldn't understand it! Even in the association, even they were speechless," he recalls. Now he is more careful and puts a condom on before intercourse.

Another risk for an illegal sex worker is getting arrested by the police. Aziz has always been very careful about this. " I didn't go through hotels," he says. " Anywhere, but not hotels. At friends' houses, at his home, etc."

If a sex worker finds himself with a man of a certain age, " they know, they're not stupid," Aziz explains. " They're wolves. They want their piece of the pie. For them it's an opportunity: either they have sex with you, or they demand a bribe" to buy their silence.

Despite his precautions and his contacts within the police, Aziz has not escaped arrest. Before the revolution in Monastir, Aziz was waiting for a client at the airport when police officers started questioning him and then took him to the police station. " I spent the whole night with everyone staring at me, all eyes were on me. The mockery... 'Oh the faggot of Tunis'..." recalls Aziz. 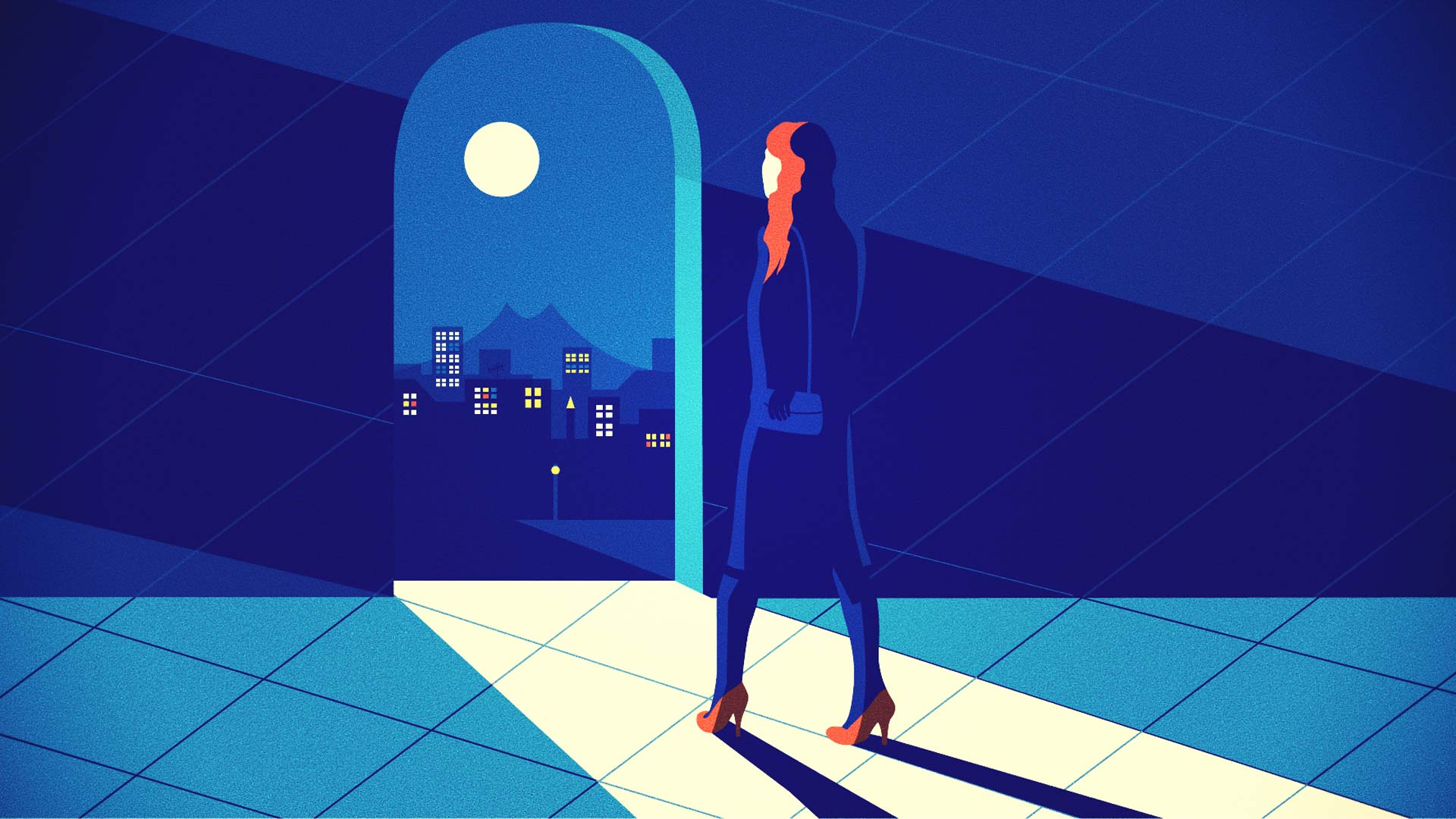 The difficulties of practicing this trade, legally or illegally, push sex workers to find new types of work, or at least, reduce their activity.

Aziz is not optimistic about his future, professionally or emotionally. He is convinced that he will die alone. " It doesn't work out, it's a lost cause," says the young man. " Maybe I've overdone it, I've pushed it too far." In addition to his former job as a sex worker, Aziz feels discriminated against because of his sexual orientation. Even though he has now left the sex trade, he still acts as a middle man between clients and friends who remain in the trade.

"Y ou still have one foot in the door, you still keep your contacts. You never know, it might be useful."

For Hamrouni, the priority now is to take care of her son, who is still in school. Her daughter, who was HIV-positive, died in 2016, and her youngest daughter is in prison for drug use. The mother now wants to change her profession, but she fears that she will not be able to earn as much outside of sex work. With the help of the association ATL MST SIDA, she is learning to crochet, a type of weaving, in the hope of making a profession out of it. On top of that, this same organization pays her a small amount of money so that she can gradually detach herself from sex work.

Few statistics exist on the subject of legal sex work. To date, only a few associations working with women in brothels currently provide data on the practise. According to the Bureau of Morals, there are nearly 70 women working in this profession in the country.

Hamrouni has chosen her own first name. Aziz's name has also been changed for the sake of anonymity.

I cover topics related to society, health, and human rights.